The Art of the Question 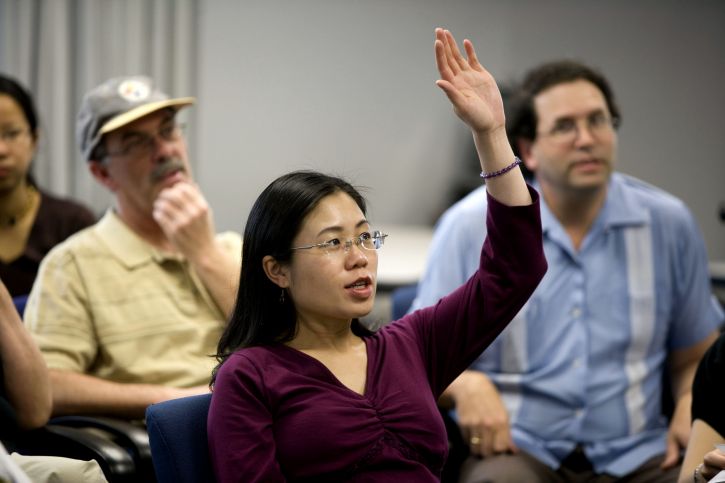 With typical ashen-gray melancholy, the old dean of St. John’s College once warned about the Great Books seminar: “You have to let a thousand golden moments just pass by… a thousand brilliant insights slip away…”  Back then, I thought he was talking about the timetable, the students, or even rules for tutoring. He was saying that and more.

A great work is not a formula. It is a real thing: an old manor house with twisting corridors and hidden staircases. No blueprint can satisfy, because a great work’s real good is found in exploration and contemplation. And that’s boundless, so almost everything must always slip by. One must simply trust the students to discover what they need.

The mid-twentieth-century Great Books movement—led by Robert Maynard Hutchins, Mortimer Adler, Scott Buchanan, Ron McArthur, and others, building small, aristocratic colleges—provided and still provides remedial literary education at the post-secondary level. They intended to repair the demolition of the two prior generations, countering modernist ideologue John Dewey’s semi-barbarous, technocratic invasion of our culture-rich county schools. After World War One, Dewey’s “literature-light” curriculum was breeding highly-skilled philistines and soulless technocrats. So the Great Books movement hoped to recover the classical vocabulary, cultural familiarity and moral icons of our public discourse and common life that had frayed over the past forty years. This may be compared to Charlemagne’s quixotic ambition to preserve the Roman Empire among semi-barbarous Franks and Lombards, as if the Empire were not already dead and beyond resuscitation.

Later in the twentieth century, prescient educators like Fritz Wilhelmsen and John Senior feared the Great Books movement had “fizzled.” In an age of cinema, it lacked the popular cultural underpinnings—the widespread adolescent “moral imagination”—needed to make sense of the Great Books. Deprived of domestic etiquette and foundational mores, a coherent cultural recovery was impossible. This was especially dispiriting, given the second, more violent invasion of the seventies: the post-modernists’ truly barbarous, anarchic seizure of our now-bureaucratized public schools. This Lennonist conquest was akin to the Carolingian collapse under the pagan Vikings’ hammers, pillaging all the great and small rivers of Christendom, disrupting road-travel and isolating desolate villages and monasteries.

But the Great Books movement didn’t fizzle. After two generations, it’s now providing a critical mass of young educators, seeding the Great Books at the high school level, where they belong, in private schools, online homeschooling programs, and mushrooming networks of charter schools. This may be akin to the epochal tenth century Cluniac Reform, which networked a thousand monasteries, rescued the papacy, enforced the Peace of God, and finally flowered—completely unpredictably—in the mendicant orders, Scholastic philosophy and Gothic architecture.

Yet, as Christopher Dawson makes clear, that medieval efflorescence required that all the expectations of the vanished past be completely kicked over and left lying scattered at the grass roots. The new synthesis had to be completely unpredictable. All the pieces had to be there and treasured, back to the dawn of writing, but the new age had to restack them itself . . . over centuries.

There Are Many Mansions

So back to the Great Books seminar and the Art of the Question. The Ancients were peoples of a book—the Analects, Torah, or Iliad. But now, if we’re anything, we are a people of books. “There are many mansions” in our culture, some lying empty, many offering temporary lodging, a few bustling with family life, and some for worship. But the greater the Great Work, the more it resists reduction to a real estate flyer. It is an edifice, with character, designed by its architect as someplace to live, even if only briefly. It may not be comfortable, it may not be livable, but it is there. The seminar needs to get in the door, so the students can explore and maybe own it.

This purpose, the occupancy of something with real character, must shape our expectations. So when we smack up against a paradox—when the seminar sits there pondering an irreconcilable either/or—this is not a failure of understanding. It’s a triumph of our intuition: apprehending something real in its many-sidedness. Real things are like that, akin to mathematical or physical constants like pi or e that always end up irrational numbers. And the author of a great work has already seen all those question marks.

Crafting a good question is not easy. The first challenge is not ducking questions we find troubling, questions that seem shallow in ourselves or irreverent toward the work. In her Autobiography, does St. Teresa of Avilla seem . . . scrupulous? Even sanctimonious? In Gulliver’s Travels, does Jonathan Swift have any real affection for Lemuel Gulliver, or for anyone?  Is the last act of A Midsummer Night’s Dream a very long denouement with no obvious purpose?

Such questions seem irreverent. Yet probing how the Carmelite might not be sanctimonious, how she may deserve self-condemnation, given extraordinary blessings, this can open up the Autobiography (and even Teresa’s need for spiritual reading). Seeing Gulliver’s Travels as “disgusting” (vide John Senior) can be a liberation from shallow cultural piety, the assumption that a great work must be good (when, like a great warrior, it may be only great). And the purpose of the Dream’s last act may be probed by asking, whose dream is it, precisely?

The challenge is focusing on the work without a formula, while neither wandering aimlessly down corridors, nor getting trapped in closets.  In Macbeth, wandering aimlessly is asking, what is ambition? The question isn’t anchored in the text, so it inevitably induces a few students to speak at length about what they feel, not what Shakespeare says. A dead-end closet is, “Why do the witches provoke Macbeth?” Because—duh—they’re evil? Yet the question, “Why can the witches provoke Macbeth and not Banquo?” might lead somewhere (even Lady Macbeth’s missing child).

In the end, the ultimate question is always why? Understanding always looks for meaning. The creator of any work must always answer for its purpose. In fiction, this almost always means the natural or unnatural motivation of its characters. In philosophy, history or politics, this means the author’s intent.

In probing fictional characters, it’s hard to avoid enduring controversies, especially with well-versed students. The classic is “why does Hamlet delay?” But there are always servants’ doors. Hamlet is saturated with the theme of suicide, “a consummation devoutly to be wished,” like Horatio’s urge to die like “an antique Roman.” Yet for a half-Christian Wittenberg alumnus, suicide is a quick slide into Hell—“Aye, there’s the rub.” So: Why does Hamlet’s ghost-father forbid him to rebuke his mother for her sordid life? How might Gertrude react? And in the end, providentially delayed, everyone is dead without the condemnation of suicide? The seminar may never get there (as the old dean mourned), sidetracked by Ophelia’s death. But they start owning Hamlet.

Questioning the Ideology of Modernity

In philosophic works, the why is more obscure. At least since Machiavelli and Montaigne, ideology slithers in. The problem in crafting questions for programmatic or ideological philosophers is sailing the seminar between the Scylla of gullibility and the Charybdis of righteous indignation. Some students bend over backwards to render agreeable even a barefaced Machiavelli, Hobbes, or Nietzsche. They don’t like to think that a Montaigne, Descartes, or Locke is pulling a fast shuffle, slipping an Epicurean card into their Idealistic or Christian cultural deck. Yet, if they begin to suspect dishonesty, they may blindly reject the work.

Questioning some signature modern issues helps the seminar see the gulf between classical antiquity, Christendom, and modernity. Some early humanists chafed under Christendom’s moral rigidity and consequent hypocrisy, so they romanticize Roman pragmatism and supposed rationality. They wink at the Christian censure of fornication and suicide as intrinsically evil acts—issues where revealed ethics are admittedly so much stricter than natural ethics. Thus, Dante sympathizes with enamored lovers and gives the suicide Cato a pass into Purgatory.

The modern insurgency’s stealth issue is the denial of original sin. However implicitly, this archaic notion is vital to the Judeo-Hellenic-Christian legacy of personal freedom and restrained monarchs. The “new Epicureans” eroded this belief with a new myth of original innocence: from Montaigne’s famous cannibals, brutally free of any fear of death, to its appalling Parisian apotheosis in Rousseau’s Noble Savage. But the seminar rarely knows what to do with that. If original sin says something bad about us, isn’t original innocence nicer? The seminar may realize only dimly that the idea of natural innocence entails the ambition of human perfectibility, thus tempting enlightened rulers to perfect the rest of us—by force, if necessary.

This modern cultural dominion of the practical (or productive) intellect and attempted suppression of contemplation brings us back to the purpose of the seminar itself. The seminar should lead students into exploring a great work, rather than presuming to master it. This may reawaken the intention of contemplation. As sympathetic phenomenologist Max Scheler put it, “man is condemned to metaphysics.” In seeking someplace to live—in seeking purpose, meaning, and being—the seminar can be led in a boundless contemplation of the great works, their moral character, and their cosmic assumptions.

There are certainly unique challenges in leading students to contemplation in the era of smartphones. Yet, in the end, happiness is species of contemplation, and—as Aristotle shockingly reveals—everyone wants to be happy.

The Art of the Question