Should There Be a Black Mass at Harvard? 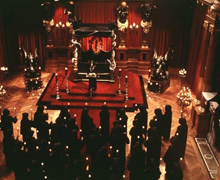 By Eric Metaxas | If you’re like me, you were probably irked that Harvard would allow a reenactment of a satanic black mass. But hold on, because there’s a lesson in all this. Really.

As you may have heard, a club at Harvard had planned to reenact a “black mass” at the university’s Memorial Hall.

For those of you unfamiliar with the idea of a “black mass,” my friend Timothy George, writing in First Things, sums it up nicely: “A black mass is a grotesque, sacrilegious ceremony in which the most sacred rite of the Catholic Church is deliberately mocked. Satan and his pomp are invoked, often in Latin, and a consecrated Eucharistic host is desecrated, often in vulgar, revolting ways.”

The reenactment was the idea of the Cultural Studies Club of Harvard Extension School. Naturally, the people sponsoring the event denied any intent to denigrate anyone’s religious beliefs but, instead to “learn and experience the history of different cultural practices.” The goal of the “performance,” they said, was to “explore religious facets that continue to influence contemporary culture.” 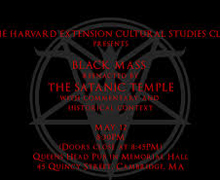 Given the precedent set by the proposed black mass, Timothy George wondered if we could look forward to “a public burning of the Qu’ran,” for example, or “a group of hooded Kluxers reenacting a mock lynching next to the statue of John Harvard.”

The answer is of course not. Christian beliefs are fair game in ways that other people’s beliefs aren’t.

And let’s be clear, while the proposed reenactment parodied a specifically Catholic sacrament, all orthodox Christian beliefs and practices are potential targets for parody and desecration. Christians may differ on what happens during the words of institution, but we agree that Holy Communion was instituted by our Lord and that, as Paul told the Corinthians, “anyone who eats and drinks without discerning the body eats and drinks judgment on himself.”

In the end, the reaction of Christians and non-believers alike led to the cancellation of the proposed reenactment. However, there were plenty of people who thought that allowing the reenactment to take place was a test of Harvard’s commitment to freedom of speech and thought.

That the intended target was the object of what Philip Jenkins of Baylor once called the “last acceptable prejudice” in American life no doubt contributed to their commitment to freedom of speech in this instance.

Let me tell you a story about the man whose writings were to serve as the basis for the black mass being reenacted.

The French writer Joris-Karl Huysmans was one of the most controversial writers of the late 19th century. His book, “Against Nature,” was seen by many of his contemporaries as “decadent, pornographic and vulgar.” His subsequent book, “The Damned,” dealt with the subject of Satanism and served as the basis for the rite cooked up by the Satanic Temple that was going to hold the black mass at Harvard.

Guess what happened after Huysmans wrote “The Damned”? Well, he experienced a conversion, returned to the Catholic Church of his childhood, and died as a lay member of the Benedictine order.

It’s a reminder that no one is beyond changing.  And it is a great example of why we should extend love even to those who denigrate us.

The Furious Love of God