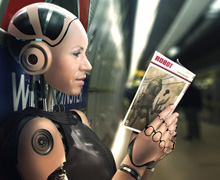 By Troy Camplin | Reading fiction opens the door to innovation.

Shortly after clocks were introduced to Japan in the sixteenth century, Japanese inventors used the principles underlying the clock’s movements to create robots. True, those robots were merely mechanical dolls, but they could often do quite intricate tasks, like serving tea and writing Japanese characters. This idea that mechanical objects could—and should—be made animate and even human, is a deep part of Japanese culture. That helps to explain why the Japanese remain at the forefront of robotic technology.

You could make the argument that if one were interested in becoming a robotics engineer, an excellent way of doing so would be to become more Japanese. But how does one become more Japanese?  How do we get into the mindset of a Japanese person, whose world-view is formed as much by Buddhism and Shintoism as the Western mind is formed by ancient Greek philosophy and Christianity?

The answer is: fiction.

When we read a work of fiction, we come to empathize with the characters. We come to know them from the inside. Literature is how we download another’s mind into our own. Even though Japanese novelists Kenzaburo Oe and Kawabata do not themselves write about robots, having engineering students read their works puts them into the minds of people who live in a culture of which robots are a natural outgrowth.

Despite such benefits, literature is one of those courses that students in pretty much every other major consider to be a pointless requirement. Why should a physics major or an engineering major care about literature? Or a chemistry or biology or psychology or economics or sociology major?

Clearly the psychology major should know some biology and sociology. And in the case of Hayek’s theory of spontaneous orders, anyone studying networks, including sociology, psychology, brain science, and biology, should definitely learn some economics. But where does literature fit into this? Wouldn’t it be better if people simple focused more on their narrow fields to learn about those fields more thoroughly?

In other words, is literature mere entertainment for those wealthy enough to get a liberal arts education? Or might there be something more to it?

First, as Mark Turner argues in The Literary Mind, we think with stories. Literary works are the most refined and complex versions of our natural way of thinking. That being the case, if you want to sharpen your thinking and make it more complex, then read more literature.

Thomas Carlyle defined literature as “the Thought of thinking Souls”—meaning if you want to think best and most beautifully, you simply must read literature. If we want our scientists and engineers and inventors to be good thinkers, we should encourage them to read literature.

Second, literature, like other arts, helps stimulate creativity. There is creative crossover, and this crossover helps people to see patterns and connections in other fields. Bursts of creativity are apt to occur when one way of thinking comes into contact with another.

Specialists in a field who only read and discuss the work of others in that field can settle into uncreative groupthink. Literature, with its complexities and narrative structures and alternative meanings, can break groupthink, creating new insights and possibilities. This is why we find the most creative scientists to be avid lovers of the arts, including literature.

When Max Planck received the Nobel Prize for physics, he commented that, “I am vividly reminded of Goethe’s saying that men will always be making mistakes as long as they are striving after something.” It was a giant of literature, not a physicist, who came to mind for Planck. Noted chaos theorist Mitchell Feigenbaum too found inspiration in Goethe—notably, his Faust, in which Goethe develops the theme of the interrelatedness of order and chaos. And when British physicist Sir Authrur Eddington tried to explain how electrons actually behave in an atom, he went with Lewis Carroll’s poem “Jabberwocky,” altering it thusly: “Eight slithy toves gyre and gimble in the oxygen wabe.”

Literature helped guide these scientists to their scientific insights—insights that challenged the predominant ways of thinking. And when we look at the lives of our most creative scientists, we discover that they all counted literature as being central to their creativity. Creativity develops out of expanding our horizons, not from narrowing them.

Literature is also filled with a number of patterns. There are complex patterns of meaningful word distribution in novels, rhythmic and often rhyming patterns in formalist poetry, patterns of speech and action in plays. Some of these patterns are regular, others are irregular, and many are fractal (exhibiting both regularity and irregularity simultaneously). Literature can thus help us to see patterns more clearly, and to see more complex patterns. This allows us to see connections and to notice when something is breaking a pattern. Both are vital to scientific discovery.

Literature is filled with the expected (patterns) and the unexpected (pattern breaks). It is sometimes filled with strange happenings—Kafka’s The Metamorphosis being an obvious example—that challenge the way you view the world. Kafka certainly presents us with a strange world and forces us to reconsider the way things are. We are faced with strange possibilities—things as strange as quantum physics and the strange attractors of chaos theory. Works like The Metamorphosis help develop a mind that’s open to counterintuitive possibilities.

And as we discussed above, literature allows you to inhabit the life and world of different people. Thus, literature develops our empathy. Men can experience what it’s like to be a woman; women can experience what it’s like to be a man. I’ve experienced being an African-American woman through Toni Morrison and Alice Walker, being an African-American man through Langston Hughes, being an African tribal priest through Chinua Achebe, being a Colombian Hispanic through Gabriel García Márquez, being a Czech Jew through Kafka, being ancient Greek through Homer, Sophocles, Euripides, and Aeschylus, and being a modern Greek through Kazantzakis, just to name a few.

I have inhabited those lives in the only ways actually possible—literature—and that has made me more open, cosmopolitan, and creative. There is little doubt in my mind that literature has allowed me to see the world as deeply complex, which has in turn affected the way I have done my own social science work, seeing the world as I do from a complexity perspective.

New ways of thinking do not occur just among disciplines, but among cultures as well. These cultural differences have resulted in geographically distinct scientific developments. It is not a coincidence that so many of the revolutionary physicists of the early part of the 20th century were Germanic or that early Darwinism was an English phenomenon. And we have already seen that robotic innovation is a mostly Japanese phenomenon.

Cultural elements contributed to those patterns, because culture affects the way we think and view the world. It affects the kinds of questions we ask, and the kinds of answers we see. As we come to understand different cultures better, we will come to think in more creative ways, which can benefit those in math, technology, engineering, and the sciences.

STEM students—those in science, technology, engineering, and math—need literature because it helps to sharpen and complexify our thinking. They will have seen a more complex world, from which they will then ask new questions and find better solutions. And as complexity science comes to dominate more and more, STEM students are going to need more complex habits of thought. Those who want to be most innovative in their fields will not ignore literature.