Population Bomb? Not Quite! 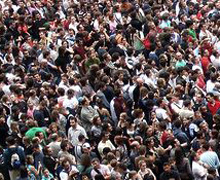 By Mark J. Perry | No, there’s been a massive global drop in human fertility that has gone largely unnoticed by the media. 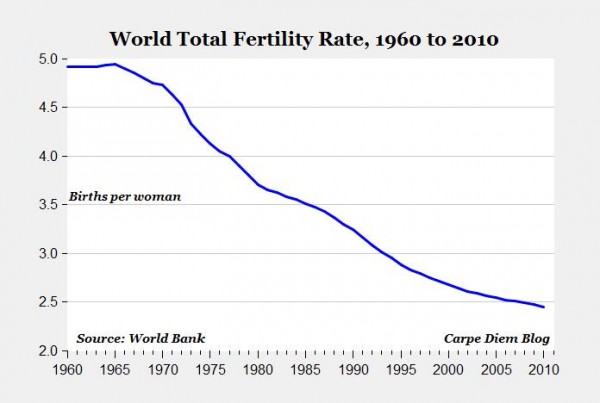 The chart above shows the significant, downward trend in the world’s Total Fertility Rate (births per woman) over the last half century, which has fallen in half, from almost 5 births per woman in 1960 to only 2.45 births per woman in 2010. Martin Lewis, a senior lecturer at Stanford University, comments in a recent article that the massive global drop in human fertility in recent years has gone largely unnoticed by the media, partly because it’s contrary to the narrative of overpopulation, mass starvation, resource depletion, environmental devastation, and societal upheaval predicted by Paul Ehrlich and others in the 1960s and 1970s. The decline in fertility rates is also happening for reasons never predicted or advocated by Ehrlich, who proposed government solutions like population controls and sterilization. Rather, the decline has been facilitated by market-based forces like modernization, mass electrification, economic development, and television.

India’s declining fertility rate (at 2.5), now only slightly higher than that of the United States (2.1), is part of a global trend of lower population growth (see chart above). Yet the media and many educated Americans have entirely missed this major development, instead sticking to erroneous perceptions about inexorable global population growth that continue to fuel panicked  rhetoric about everything from environmental degradation and immigration to food and resource scarcity.

In today’s world, high fertility rates are increasingly confined to tropical Africa. Birthrates in most so-called Third World countries have dropped precipitously, and some are now well below the replacement rate. Chile (1.85), Brazil (1.81), and Thailand (1.56) now have lower birthrates than France (2.0), Norway (1.95), and Sweden (1.98).

I find it extraordinary that the massive global drop in human fertility has been so little noticed by the media, escaping the attention of even highly educated Americans. The outdated idea that Mexico has a crushingly high birthrate continues to inform many discussions of immigration reform in the United States, even though Mexico’s TFR (2.32 in 2010) is only slightly above that of the United States.

It almost seems as though we have collectively decided to ignore this momentous transformation of human behavior. Scholars and journalists alike continue to warn that global population is spiraling out of control. A recent LiveScience article, for example, quotes a co-author of an April 2013 Science report who argues that “the poorest nations are caught in a downward spiral that will deplete resources and cause a population explosion.” The article goes on to argue that “with the world population slated to hit 9 billion by the year 2050, many scientists and others worry that unchecked population growth and increasing consumption of natural resources will cause dire problems in the future.”

Although the LiveScience article notes that the original report focused on sub-Saharan Africa, it does not mention the fact that high birthrates are in fact increasingly confined to that part of the world, or that fertility rates are persistently declining in almost every country in Africa, albeit slowly. Many African states, moreover, are still sparsely settled and can accommodate significantly larger populations. The Central African Republic, for example, has a population of less than 4.5 million in an area almost the size of France.

Some scholars have argued that recent fertility decreases in India and elsewhere in the Third World are more specifically linked to one technological innovation: television. The TV hypothesis is well-known in the field, discussed, for example, in the LiveScience article on the African population explosion mentioned above. In regard to India, Robert Jensen and Emily Oster argue persuasively that television works this magic mostly by enhancing the social position of women. As they state in their abstract:

This paper explores the effect of the introduction of cable television on women’s status in rural India. Using a three-year, individual-level panel dataset, we find that the introduction of cable television is associated with significant decreases in the reported acceptability of domestic violence towards women and son preference, as well as increases in women’s autonomy and decreases in fertility. We also find suggestive evidence that exposure to cable increases school enrollment for younger children, perhaps through increased participation of women in household decision-making. We argue that the results are not driven by pre-existing differential trends.

I suspect that the rapid drop in fertility in such countries as India and Brazil, as well as its association with television, has been missed in mainstream U.S. commentary in part because it flies in the face of deeply ingrained expectations. That television viewing would help generate demographic stabilization would have come as a shock to those who warned of the ticking global population bomb in the 1960s.