Polls on global warming, energy, and the sequester 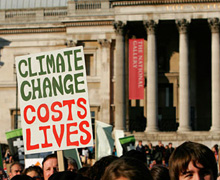 By Karlyn Bowman, Andrew Rugg, Jennifer K. Marsico | American Enterprise Institute | The latest issue of AEI’s monthly newsletter on public opinion, AEI Political Report, examines the attitudes toward global warming, how Americans feel about the production and transportation of energy, the fallout of the sequester, changing attitudes about taxes, and the situation in North Korea. Some highlights:

* Solid majorities of Americans believe climate change is real, and 54 percent say its effects have already begun. But 64 percent do not believe it will pose a serious threat to them in their lifetimes. Acting to prevent climate change is a low priority for the public.

* Americans want to emphasize developing alternative sources of energy over expanding production of traditional sources. Natural gas is an exception. In a recent Gallup poll, 65 percent said more emphasis should be placed on producing energy from natural gas.

* In an early April Gallup poll, 49 percent said they didn’t know enough about the sequester to say whether its effect on the economy would be positive or negative, and 57 percent felt that way about its effect on their personal financial situation.

* Today, people are divided about whether their federal income taxes are too high or about right. Only 2 percent think they are too low.

* More than two-thirds of Americans say taxes are hurting their finances, and 6 in 10 registered voters say their families’ paychecks are smaller this year because more taxes are being taken out.

* In recent surveys, the public views the current North Korean threats as serious and real, with Americans more willing to commit troops should they be needed.

If you find this topic interesting, be sure to enroll in Free Think U’s course experience, “Is Global Warming Theory True?” which you can find here: www.freethinku.com.