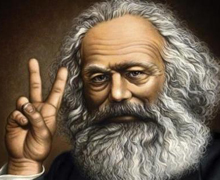 By W.A. Beatty | The excellent American Thinkers article “Conservatives Pushing Back” by Bruce Walker explored [how] . . . political correctness (PC) is to culture what Marxism is to economics….

So, in an effort to further understand PC, exploration of its similarities to Marxism is in order.

Karl Heinrich Marx (1818-1883) was a German socialist.  Marx’s social, economic, and political theories proclaimed that societies progress through class struggle.  His focus was upon economics, so Marx concentrated on the conflict between an ownership class that controlled production and a proletariat that provided the labor for production.  He referred to capitalism as the “dictatorship of the bourgeoisie.”  The proletariat, the oppressed workers, were supposed to be the beneficiaries of a social revolution that would place them on top of the power structure.

Marx’s key concept was “class struggle.”  That’s where PC comes in.  PC seeks to impose a uniformity of thought and behavior, just like Marxism, on all Americans and is, therefore, quite totalitarian in nature.  PC is, in concept, similar to Marxism, but its focus is upon culture, rather than economics, as the class struggle environment….

PC takes a political philosophy and says that on the basis of the chosen philosophy, certain things must be true, and reality that contradicts its “truth” must be forbidden — eradicated since it disputes PC, exposes as untrue what PC says is true.  People are reluctant to live a lie, so they use their eyes and ears to see reality, to say, “Wait a minute.  This isn’t true.  I can see it isn’t true; the power of the state [PC] must be put behind the demand to live a lie.”  Marxism, by denying economic reality, did exactly the same thing.

PC, just like Marxism, has a method of analysis that always provides the answer it wants.  For PC, the “answer” is found through deconstruction, which takes any situation, removes all meaning from it, and replaces it with PC’s desired meaning….

PC, just like Marxism, depends upon defining what it considers good and bad groups.  It defines good groups as “victims” of bad groups.  The victims can never be anything but good, regardless of what their actions may be.  Witness what the Black Panthers did in Philadelphia, PA in 2008 and 2012.  Any group identified as good by PC (homosexuals, blacks, Hispanics, illegal immigrants, feminist women, mentally and/or physically challenged people, the poor, environmentalists, the list goes on and on) must be shown deference, both physically and linguistically.  They must not be offended, must not be insulted.

Any group identified as bad by PC, such as white males or any Christian group, can be offended.  This offense, PC practitioners say, “makes up” for past offenses certain to have been committed in the past by bad groups.  And what’s worse is that the PC practitioners get to define the offenses committed by the bad groups.  This situation, by definition, is a “self-fulfilling prophesy.”

…PC, just like Marxism, depends upon expropriation.  PC is literally taking over our language, and woe be unto him/her that dares speak the truth.

…PC, just like Marxism, has a single factor explanation of all of history.  PC says that all history is determined by power, by which groups have power over which other groups.  Nothing else matters.  Period.  PC is all about gaining power for the good groups that it defines.  To further that goal, PC literally rewrites history….

The U.S. has become an ideological state, a country with an official state ideology and history that has been defined by PC.  People convicted of “hate crimes” as defined by PC are currently serving jail sentences for political thoughts contrary to PC.  And it’s only getting worse — PC continues to spread.

Marx believed his ideology, his economic system to be true.  But, reality contradicted his system.  His ideology did not adjust to reality.  Hopefully the PC ideology will soon suffer a similar fate….