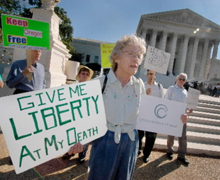 By Ryan T. Anderson, Ph.D. | Allowing physician-assisted suicide (PAS) would be a grave mistake for four reasons, as explained in a Heritage Foundation Backgrounder, “Always Care, Never Kill.”[1] First, it would endanger the weak and vulnerable. Second, it would corrupt the practice of medicine and the doctor–patient relationship. Third, it would compromise the family and intergenerational commitments. And fourth, it would betray human dignity and equality before the law. Instead of helping people to kill themselves, we should offer them appropriate medical care and human presence.

This Issue Brief focuses on how physician-assisted suicide will negatively affect our culture, especially the family and our intergenerational obligations. The temptation to view elderly or disabled family members as burdens will increase, as will the temptation for those family members to internalize this attitude and view themselves as burdens. Physician-assisted suicide undermines social solidarity and true compassion. 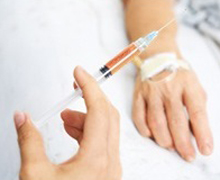 The Family Has Responsibility for Disabled and Elderly Relatives

There is a natural cycle to human life. Human beings enter the world as entirely needy, totally dependent newborns. Many people exit life dependent on others as well. Along the way, there will undoubtedly be periods of trial and tribulation when people need the assistance of others. Traditionally, the family has been a central social institution for weathering life’s storms. Mothers and fathers take care of children at the dawn of life, and then children take care of their aging parents at the twilight.

Family life is meant to include shouldering one another’s burdens and assisting those in need. In his provocatively titled essay “I Want to Burden My Loved Ones,” ethicist Gilbert Meilaender explains why he refuses to accept the logic of atomistic individualism:

Is this not in large measure what it means to belong to a family: to burden each other—and to find, almost miraculously, that others are willing, even happy, to carry such burdens? Families would not have the significance they do for us if they did not, in fact, give us a claim upon each other. At least in this sphere of life we do not come together as autonomous individuals freely contracting with each other. We simply find ourselves thrown together and asked to share the burdens of life while learning to care for each other.[2]

While the family is the primary institution tasked with intergenerational care, no family is an island. As Dr. Kass and Eric Cohen point out, families are situated within a larger culture—and the law shapes this culture:

Even if the burdens of aging and death are always borne most fully by individuals and families, how we age and die are not only private matters. Our communal practices and social policies shape the environments in which aging and caregiving take place—not only in moments of crisis, when life-or-death decisions need to be made, but in the long days of struggle and everyday attendance. Faith-based institutions and community groups support families in meeting those needs they cannot meet alone. Programs like Medicaid assist those who are old and impoverished, in need of nursing that they cannot themselves afford.[3]

Another zone of fearful silence. Outside the door are the relatives. What will they be telling the doctor about my condition and my wishes? What is prudent to tell them about my suffering, my depression, my wishes? Are they interpreting my state of mind just as I would wish? Are their interests in line with mine?[4]

Physician-assisted suicide creates a temptation for relatives and thus undermines trust. Because of its potential to corrupt these intergenerational ties, Finnis concludes that in a world with PAS, “[m]any people will find that their nearest and dearest are less and less near, and less and less dear.”[5]

Victoria Reggie Kennedy, widow of the late Senator Edward Kennedy (D–MA), campaigned against a bill that would have legalized PAS in Massachusetts on precisely these grounds. Kennedy noted that “the proposed law is not about bringing family together to make end of life decisions; it’s intended to exclude family members from the actual decision-making process.”[6] She went on to explain how her husband was able to die a true death with dignity by avoiding the pressures of assisted suicide:

When my husband was first diagnosed with cancer, he was told that he had only two to four months to live, that he’d never go back to the U.S. Senate, that he should get his affairs in order, kiss his wife, love his family and get ready to die.

But that prognosis was wrong. Teddy lived 15 more productive months.… Because that first dire prediction of life expectancy was wrong, I have 15 months of cherished memories—memories of family dinners and songfests with our children and grandchildren; memories of laughter and, yes, tears; memories of life that neither I nor my husband would have traded for anything in the world.

When the end finally did come—natural death with dignity—my husband was home, attended by his doctor, surrounded by family and our priest.[7]

Mrs. Kennedy concluded that most people wish for a good death “surrounded by loved ones, perhaps with a doctor and/or clergyman at our bedside.” But with PAS, “what you get instead is a prescription for up to 100 capsules, dispensed by a pharmacist, taken without medical supervision, followed by death, perhaps alone. That seems harsh and extreme to me.”[8] Indeed it is.

Even if legal protections against pressure and coercion could somehow be made effective, how could they prevent the corruption of culture?[9] In a society with PAS, legal safeguards will not mute the clear moral message transmitted by laws allowing PAS: that some lives are “not worth living” and that some people have a duty to end their lives.

These cultural pressures are not merely the suppositions of cultural philosophy. They play out in real life. Dr. Herbert Hendin has documented many such stories, such as this one:

A wife who no longer wished to care for her sick, elderly husband gave him a choice between euthanasia and admission to a home for the chronically ill. The man, afraid of being left to the mercy of strangers in an unfamiliar place, chose to have his life ended; the doctor, although aware of the coercion, ended the man’s life.[10]

These stories are not isolated incidents. Dr. Hendin reports that a study of Dutch hospitals found that “doctors and nurses reported that more requests for euthanasia came from families than from patients themselves. The investigator concluded that the families, the doctors, and the nurses were involved in pressuring patients to request euthanasia.”[11] The same pressure is evident in the limited places where physician-assisted suicide is legal in the United States. Oregon Health Authority research found that 40 percent of those who were assisted with suicide cited being a burden on family or friends and caregivers as their motivation to end their lives.[12]

These considerations are particularly disturbing because suicide is a phenomenon that can spread throughout a society, based on imitation. Social scientists, Dr. Aaron Kheriaty notes, “know that there is a ‘social contagion’ aspect to suicide.”[13] In its guide to preventing suicide, the World Health Organization notes the scholarly research on the imitative nature of suicide:

Commenting on Brittany Maynard’s suicide, Dr. Kheriaty argues that “given what we know about suicide’s social effects, and given the media portrayal around her death, we can anticipate that her decision will influence other vulnerable individuals.”[15] Dr. Kheriaty concludes that PAS will send a signal to legitimize such suicidal desires:

Refusing to legitimate suicide helps those in need. The practice of physician-assisted suicide…sends a message that some lives are not worth living. The law is a teacher: If assisted suicide is legalized, this message will be heard by everyone who is afflicted by suicidal thoughts or tendencies.[16]

In doing so, PAS undermines our entire culture.

Physician-assisted suicide will negatively affect our culture, especially the family and our intergenerational obligations. The temptation to view elderly or disabled family members as burdens will surely rise. The temptation for elderly and disabled family members to view themselves as burdens will also surely rise. Instead of the solidarity of civil society and true compassion, PAS threatens to create cheap solutions by eliminating those who are perceived as socially and economically burdensome.

Instead of helping people to kill themselves, we should offer them appropriate medical care and human presence. We should respond to suffering with true compassion and solidarity. Doctors should help their patients to die a dignified death of natural causes, not assist in killing. Physicians are always to care, never to kill.[17]

By Ryan T. Anderson, Ph.D. | Allowing physician-assisted suicide (PAS) would be a grave mistake for four reasons, as explained in a Heritage Foundation Backgrounder, “Always Care, Never Kill.” First, it would endanger the weak and vulnerable. Second, it would corrupt the practice of medicine and the doctor–patient…