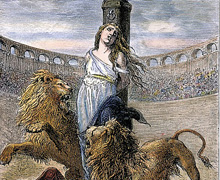 By Raymond Ibrahim | A new book claims Christian martyrdom was fabricated, but the present sheds light on the past.  Christian martyrdom under the militant Roman Empire has long been an unquestioned historical fact, but Candida Moss in her new book The Myth of Persecution (HarperOne, March 2013) claims that many of history’s best known narratives of Christian martyrs were entirely fabricated.

This thesis, as most modern-day academic theses concerning early history, is fundamentally based on conjecture, projections, and above all, anachronisms—the sort that earlier turned Christ into a homosexual hippie and Muhammad into a humanitarian feminist. Neither Moss nor anyone else can prove or disprove what the primary historical texts say—that Roman persecution of Christians was real, widespread, and brutal.

But from an objective point of view, is it not more reasonable to accept the words of contemporary eyewitnesses than it is the conjectures of a politically charged book that is separated from its subject by 2,000 years?

Among other ideas unintelligible and inapplicable to the ancient world, Moss invokes “T-shirts,” “favorite athletes,” and “brands of soda” to “prove” that the ancient narrative of Christians tortured and killed for their faith was all a gag to make a profit: “Martyrs were like the action heroes of the ancient world,” Moss says. “It was like getting your favorite athlete endorsing your favorite brand of soda. … Of course, the prices were completely jacked up.”

In short, the merit of Moss’ thesis rests in the fact that it satisfies a certain anti-Christian sentiment, a modern-day political perspective—and not that it offers facts or serious arguments. By projecting cynical postmodern perspectives onto the ancient Romans and Christians, the thesis is ultimately farcical.

Even so, let’s tackle the myth charge from a different angle. Let’s leave the question of eyewitnesses, texts, and traditions, and instead rely on common sense—though it’s in short supply in the academic community. The fact is, we can often learn about the past by looking at the present. If at least 100 million Christians are being persecuted today, in an era when Western ideas of humanitarianism and religious tolerance have permeated the rest of the world—is it not reasonable to conclude that 2,000 years ago, when “might made right” and brutality prevailed, that Christians were also being persecuted then, especially when contemporary sources indicate as much?

Consider the modern Islamic world alone, where most of today’s Christian persecution occurs. Today Christians under Islam are still being tortured, imprisoned, enslaved, and killed; their churches and Bibles are routinely banned or burned.

Why? Because Islam is a supremacist cult, which brooks no opposition and demands conformity: Islamic law (see Quran 9:29) teaches that those who come under its hegemony must either convert, keep their faith but live as ostracized third-class citizens (dhimmis), or die. The supremacist culture of the Roman Empire was not much different.

If today’s Muslims—acquainted with modern ideas of humanitarianism and tolerance—are still brutally persecuting the Christian minorities in their midst, are we seriously to believe that the warlike Roman Empire, which existed at a time when brutality and cruelty were the expected norm, did not persecute Christians, especially when the records say it did?

Christianity was and still is the one religion that refuses to comply with its supremacist overlords, putting its beliefs above the preservation of life. Other religions approve outward conformity (Islamic law permits Muslims to outwardly renounce Muhammad if doing so will save their lives), while Christians have long had a habit of “annoying” their superiors by refusing to comply, even to save their lives.

Just as Christ irked Pilate by refusing to utter some words to save his life, his disciples and countless other ancient Christians followed his example, and today modern-day Christians do the same. They continue to be persecuted for it. (Most recently in Iran, Islamic authorities are trying to force imprisoned Iranian-American Saeed Abedini to abjure Christ, even as he resists under torture.)