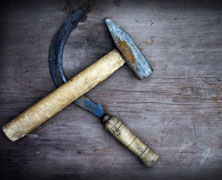 by Publius | A Review of William S. Lind’s paper, “Political Correctness:” A Short History of an Ideology | Ideologues are in disfavor these days.  Perhaps they always have been.  An ideology is the product of a philosophical system that some have declared definitive of reality.  The problem with ideologies is that they are static.  Once they have chosen a system as defining all reality, then if anything comes along (and this seems inevitable) that would question that system, the ideology cannot change to fit that question or it abandons the system and thereby collapses upon itself.  Political Correctness is an ideology, so it has this problem.

William S. Lind wrote a brief history of PC and this very problem of inflexibility.  A quick review of his points will help our Free Thinking readers better understand this modern ideology. Most of what follows is simply a paraphrase of his work.  Read, and then resist.

“While some Americans have believed in ideologies, America itself never had an official, state ideology – up until now. But what happens today to Americans who suggest that there are differences among ethnic groups, or that the traditional social roles of men and women reflect their different natures, or that homosexuality is morally wrong? If they are public figures, they must grovel in the dirt in endless, canting apologies. If they are university students, they face star chamber courts and possible expulsion. If they are employees of private corporations, they may face loss of their jobs. What was their crime? Contradicting America’s new state ideology of ‘Political Correctness.'”

But what is this phrase and where does it come from?  Ideologies are best understood when studied historically.  “’Political Correctness’ is in fact cultural Marxism – Marxism translated from economic into cultural terms. It goes back at least to the 1920s and the writings of the Italian Communist Antonio Gramsci. In 1923, in Germany, a group of Marxists founded an institute devoted to making the translation, the Institute of Social Research (later known as the Frankfurt School). One of its founders, George Lukacs, stated its purpose as answering the question, “Who shall save us from Western Civilization?” The Frankfurt School gained profound influence in American universities after many of its leading lights fled to the United States in the 1930s to escape National Socialism in Germany.”

“The Frankfurt School blended Marx with Freud, and later influences added linguistics to create “Critical Theory” and “deconstruction.” These in turn greatly influenced education theory” throughout much of the twentieth century, “and through institutions of higher education gave birth to what we now call “Political Correctness.” The lineage is clear, and it is traceable right back to Karl Marx.”

So what does Lind say can be done?  His words are frank and to the point.  Criticism will not defeat this ideology.  Defiance is the only course of adequate action.  “They must use words it forbids, and refuse to use the words it mandates; remember, sex is better than gender. They must shout from the housetops the realities it seeks to suppress, such as the facts that violent crime is disproportionately committed by blacks and that most cases of AIDS are voluntary, i.e., acquired from immoral sexual acts. They must refuse to turn their children over to public schools.”

His next recourse is the clincher: “Above all, those who would defy Political Correctness must behave according to the old rules of our culture, not the new rules the cultural Marxists lay down. Ladies should be wives and homemakers, not cops or soldiers, and men should still hold doors open for ladies. Children should not be born out of wedlock. Open homosexuals should be shunned. Jurors should not accept race as an excuse for murder.

“Defiance spreads. When other Americans see one person defy Political Correctness and survive – and you still can, for now – they are emboldened. They are tempted to defy it, too, and some will. The ripples from a single act of defiance, of one instance of walking up to the clay idol and breaking off its nose, can range far. There is nothing the Politically Correct fear more than open defiance, and for good reason; it is their chief vulnerability.

“At present, Political Correctness prospers by disguising itself. Through defiance, and through education on our own part (which should be part of every act of defiance), we can strip away its camouflage and reveal the Marxism beneath the window-dressing of “sensitivity,” “tolerance” and “multiculturalism.” Who dares, wins.”

Post is taken from “Political Correctness:” A Short History of an Ideology, Edited by William S. Lind. A Product of the Free Congress Foundation, November, 2004