Pandemics And Our Love For Post-Apocalyptic Drama 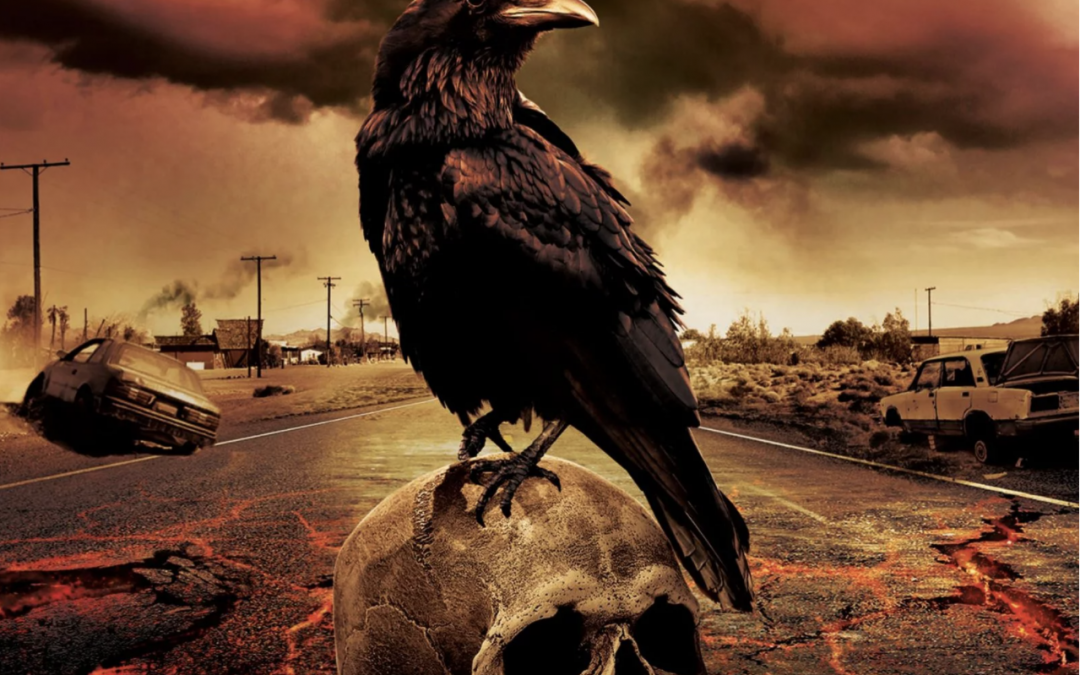 Better to go out with a bang than a wimper? Dating back to the roots of Christianity we have always been obsessed with ‘The End.’

In the year 793, Catholic monks made the following report, all of it disturbing. “In this dire year portents appeared over Northumbria and sorely frightened the people. They consisted of immense whirlwinds and flashes of lightning, and fiery dragons were seen flying in the air. A great famine immediately followed those signs, and a little after that, in the same year, on 8 June, the ravages of heathen men miserably destroyed God’s church at Lindesfarne.”

The End, it seemed, had come.

About four hundred years later, Snorri Sturluson recorded the ancient legends of the Norse as the Poetic Edda. The opening Edda, the Völuspá (the Seeress’s Prophecy), tells the story of creation as well as that of Ragnarök, the end of the Gods. The story is every bit as disturbing as the one told in Lindesfarne centuries earlier. Deceptively, the End seems, at first, beautiful, lush, and giving.

Then may again wondrous golden tablets in the grass be found, which in days of old, they had possessed. Unsown then the fields will grow, evil be amended; Baldr is coming. Hodr and Baldr dwellin Hropts victory-hall, well with Valtivar. Understand ye yet, or what? Then may Hænir by lot wood choose, and farmsteads build, brothers bothin wind home wide. Understand ye yet, or what? She a hall see standing brighter than sun, with gold bedecked, in Gimlé; there shall good people household build, and in long time happiness enjoy.

Yet, it is all an illusion, for the demon of demons has been loosed, and it feeds and continues to feed. “Then comes the gloomy dragon flying, serpent from below, from Nidafjollum; bears in feather corpse—flying over plain—Nidhoggr now pale. Now may she sink.”

The End, truly, had come.

Eight-hundred years later, G.K. Chesterton proclaimed that all of us are already living in the End Times. In his extraordinary epic poem, The Ballad of the White Horse, he mused:

The end, quite possibly, had begun long, long ago, and we merely linger. 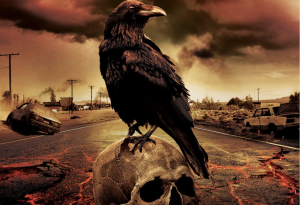 To be certain, speculative fiction and myth have long—and perhaps, inherently in their very nature—attempted to envision what an Apocalypse might look like. Indeed, the entire trajectory of Christianity, at least as presented in the New Testament, is toward not just the last days, but toward the very last days, the days that will end only with the coming of the New Jerusalem.

Here we are in 2020 with a pandemic. Just how is it affecting our view of society, and what have speculative fiction authors had to say that might anticipate it? Dragons flying in the air? Well, the United States Department of Defense just released videos of at least three Unidentified Flying Objects. Check. Massive storms moving across the Great Plains and the American South? Check. Whirlwinds (see massive storms moving across the Great Plains)? Check.

But here’s where our world gets so much more interesting than the world of 793: Mass hysteria? Check. Turning in one’s neighbors for disobeying lockdown? Check. Certain necessities missing from our grocery store aisles? Check. Preachers (and priests) warning us about the Second Coming? Check. Conspiracy theories that China might have manufactured the virus as a bioweapon? Check. Crazy solutions proposed to end Corona? Check. Fears that all of this might have been orchestrated by the elites of the world to crush the little people? Check.

William McNeill once reminded us that the history of the world is the history of plagues and peoples. There’s nothing completely new about a virus wiping out mass numbers of peoples. The Bubonic Plague slaughtered anywhere from 30 to 50 percent of Europeans in the first half of the 1300s, and various poxes did the same to 90 to 95 percent of American Indians. Country visitors to New York and, God forbid, London or Paris, often died by germs. Though we are each made in the infinite image of a loving God, we are also, each and every one of us, walking petri dishes.

The plagues are not new, but the response to the plague is, at least in the modern world, unprecedented. Never have a people shut down their economies—which, remember, produce our foodstuffs and necessities for civilization—and isolated themselves so thoroughly. What we are seeing in Michigan, for example, is not all that different from the totalitarian rule of the 1930s. We risk, after all, damaging permanently two of the most important aspects of humanity: creating and sustaining communities and driving ourselves away from boredom.

One major genre of literature has dealt with such questions from the very beginning of its existence—science fiction, broadly understood. It is nearly impossible to tell the story of science fiction and speculative fiction in the modern world without diving into one of its most important sub-genres, post-apocalyptic literature. After all, the very first modern science fiction novel (the term science fiction did not become mainstream until 1952) dates back to 1826, Mary Shelley’s The Last Man, which, crazily enough, dealt with a plague that wiped out most of the earth’s population.

Not surprisingly, the sub-genre of post-apocalyptic literature boomed after the dropping of the two American atomic bombs on Hiroshima and Nagasaki. Suddenly, megadeath seemed a possible reality. Even mainstream books—such as Nevil Shute’s On the Beach—dealt with apocalyptic horrors. Some, such as R.H. Benson’s The Lord of the World (1907) and Walter Miller’s Canticle for Leibowitz (1959), relied on the mass destruction of nuclear weaponry. Amazingly enough, Benson’s 1907 novel hypothesized the weaponry as “city crackers.”

But, there were a myriad of other ways to kill off the earth and human beings, too. In Arthur C. Clarke’s Childhood’s End (1953), humans evolve into something new. Jack Finney feared the arrival of communist, parasitic aliens in his serialized Invasion of the Bodysnatchers (1955). J.G. Ballard entertained the idea of twin killer, solar radiation and the greenhouse effect, in his The Drowned World (1962). In Larry Niven and Jerry Pournelle’s Lucifer’s Hammer (1977), a comet hits the earth. Douglas Adams has the interstellar public works commission bulldoze the earth as a barrier to good trade and good highways in The Hitchhiker’s Guide to the Galaxy (1979). S.M. Stirling blames a hiccup in the temporal order in Dies the Fire (2004). Gordon Dickson offered simple economic collapse for Wolf and Iron (1993). Stephen King, of course, wrote his tale of “Dark Christianity,” The Stand (1978), employing the plague as the method of death. Justin Cronin unleashed vampires upon us all in The Passage (2010), and Richard Matheson let loose the zombie-vampires in I am Legend (1954).

The list of post-apocalyptic thrillers and their means of destruction is nearly endless.

When asked, our greatest living science-fiction author, Kevin J. Anderson states rather clearly and profoundly the changes we both anticipated and did not with this current outbreak of quasi-plague. “Science fiction and fantasy have long predicted great plagues that lead to the destruction of society. Right now we seem to be living in the midst of two Stephen King novels, The Stand—in which a superflu wipes out most of the human race and the survivors split into vehemently opposed factions—and The Shining—in which long, forced isolation takes its toll and drives a man mad and destroys his family,” Anderson told me. And yet, many of the changes to society might very well be mundane in the larger scheme of things. Anderson continues:

My own science fiction extrapolations have kept me awake at night as I imagine the accelerated repercussions in business, personal interactions, education, entertainment. They will be far reaching and unpredictable. It was easy to envision, say, that this new situation might well be the death of movie theaters as we know them. (I would much rather sit at home and stream a new movie on my TV, without the rigamarole and expense of packing into a crowded theater.) Who, though, could have guessed that this would cause a sudden comeback of drive-in movie theaters?

What about children? He adds:

Schools are instantly switching over to online learning, video classes and distant interaction. That seems less than ideal, keeping all these kids at home and away from their friends, being taught by not-necessarily-qualified parents. On the other hand, I talked to a mother whose son is on the autism spectrum, who never did well in social environments and always had trouble in school…but now he’s absolutely thriving with online classes, where he doesn’t have to go in and face other children who don’t understand him. Who would have foreseen that as an advantage?

So, perhaps the Coronavirus is not quite as dramatic as it might first seem. As Anderson cautions, though, day by day, and week by week, the situation becomes more complicated and the results more unpredictable.

What, then, do we learn from all of this, especially when we consider the urgency so woven into the drama of the post-apocalyptic literature?

Interestingly enough, we are reminded that the American public—most post-apocalyptic writers are American or Canadian—is absolutely fascinated by mass death and our end being part of a larger and greater drama. We’ve been fascinated with this long before the Coronavirus reared its hideous microscopic terror. Though the writing of post-apocalyptic literature waned after 1989, it has again boomed since 2001. Indeed, it would be impossible to walk through the shelves of your local bookstore—especially in the young adult section and the comic-book section—without being overwhelmed by the sheer number of stories dealing with the end.

And, truly, there are at least three reasons we so love our Apocalypses. First, as noted above, the story is deeply and utterly intertwined with the story of Christianity. Second, and intimately related to the first point, is that, as humans, we crave to be part of a larger story, to have some role to play in the greatest dramas possible. How much better to die fighting creatures of the night in hand-to-hand combat than simply falling over from a heart attack? And, third, post-apocalyptic literature by its very literary device, wipes the slate clean, allowing for a new world—though usually one of horror—to be created and explored. These post-destruction worlds become a kind of inverted Eden in which we can retell our story.

Perhaps, we hope, when we go we will go with a bang, not a whimper. Now, where are those fiery dragons, the ones those monks and those Department of Defense bureaucrats saw?

Pandemics And Our Love For Post-Apocalyptic Drama