No One Believes It, But Extreme Poverty Is Declining Globally 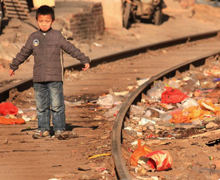 By Josh Shepherd | In new research polling released this week, Barna Group finds that more than eight in 10 Americans (84 percent) are unaware global poverty has been reduced drastically in recent decades.

The nationwide sample reveals that a majority of Americans (67 percent) falsely believe global poverty has actually increased. In contrast to respondents over age 40, millennials have the most optimism on ending extreme poverty and enthusiasm to act.

Rising economic freedom and declining extreme poverty across the globe have been examined in-depth for over 20 years by The Heritage Foundation and The Wall Street Journal in The Index of Economic Freedom.

One essay featured in the latest Index entitled “Antidote to Poverty: Economic Freedom, Not Government Dependency” points out:

Economic freedom has done more for the poor throughout the world than any taxpayer-funded social program or welfare check ever could.

This system based on individual freedom, private property, limited government, and limited regulation has improved the lives of millions of people worldwide.

As shown in the chart below, these findings of the index have been backed by economic data from internationally recognized sources including the World Bank. 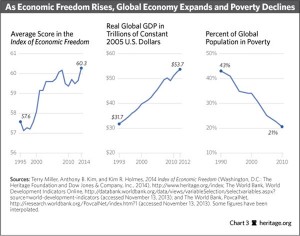 Despite the effective reversal of poverty for millions worldwide in recent decades, many Americans’ attitudes remain cynical. Barna Group’s national polling finds more than two-thirds of U.S. adults (68 percent) do not believe it is possible to end global poverty within the next 25 years.

A bright spot in the new study? Younger Americans, particularly those active in a local faith community, are optimistic on greatly reducing extreme poverty and eager to act. As Barna Group notes:

Practicing Christians under 40 are the most optimistic about ending extreme poverty, with nearly half (48%) believing it’s possible to end it in the next 25 years…

Additionally, more than four in 10 practicing Christians under age 40 (44%) strongly agree that Christians have a particular responsibility to help solve global poverty.

Does Capitalism Hurt the Poor?

How Much Land Does a Man Need?

Is There a Cure for Poverty?