“Newspeak” and the Genius of George Orwell 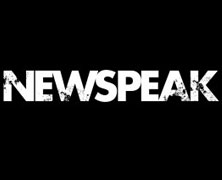 This page is inspired by the language of Newspeak from George Orwell’s classic novel Nineteen-Eighty-Four. Newspeak was the official language of the totalitarian state of Oceania. In the totalitarian politics of Oceania, the state possessed control over every aspect of its citizen’s lives. The way they dressed, who they associated with, what they did with their free time… and most importantly – their thoughts. To achieve this goal, the government set out to construct a “perfect” language… a language in which all concepts that went against party policy were removed.

The state wanted to destroy every idea that conflicted with Ingsoc (English Socialism). The concepts of freedom, liberty, love, privacy, and democracy went against basic party principles, and therefore, had to be stamped out. And, since these concepts were becoming non-existent, there was no longer any need to have words to describe them. By destroying the words themselves, the state would be able to destroy the concepts they represented.

Once the language had been cleansed, there would be no way to form any resistance against the government. The communication of heretical ideas would be impossible, since the words to describe any “unorthodox” ideas would not be available. Any would-be revolutionaries would be robbed of the words that were necessary to spread their ideas. Moreover, it prevented anybody from even thinking any “dangerous” ideas in the first place.

But the goal of Newspeak was more than just the mere destruction of words. Scores of words had their meanings altered in order to make certain ideas more palatable for the masses.

The state used misleading terms such as Joycamp to describe its horrible forced labor camps … The state’s propaganda department was called The Ministry of Truth … The rationing department – The Ministry of Plenty … The cold, unemotional act of sex for the sole purpose of producing children for the state is promoted as being goodsex.

One can see some of the same tactics is use today. Terms such as Affirmative Action, Homophobic, Peacekeepers, Sexual Harassment, and The War on Drugs were non-existent before this century. They were fabricated by government and special interest group specifically for the purpose of misleading the public and swaying public opinion.

But, as in Orwell’s Newspeak, the state doesn’t just stop with creating new words. In some cases a perfectly good word already exists, but has some sort of negative connotation attached to it. In order not to “offend” anybody, must make up a new word in order to get out of saying what he really means. Why would a politician utter a potentially inflammatory statement such as, “The U.S. occupational force in the Middle East has succeeded in securing the oil supply”, when you can avoid any bad-press simply by saying, “The U.S. Peacekeepers have succeeded in protecting American interest”. And when the president’s press secretary spews this sort of propaganda to the media, it would be too hash to say that he slanting the news – That would make it sound like he was doing something wrong. So instead, we use the happy playful term, “spin”.

And of course, this site also includes information on the book that is responsible for creating “Newspeak”, George Orwell’s novel 1984. Without this book, we would not have the words necessary to keep Big Brother from using Newspeak to destroy oldthink. There would be no way to stop the Thought Police from trying to punish thought criminals for questioning blackwhite concepts. The Ministry of Truth would be free to spread doublethink that only a prole proficient in crimestop could bellyfeel. And when the duckspeakers on the evening news malreport the news, we can see it for the prolefeed that it is, and rejoice in the fact that, unlike the citizens of Oceania, we have the power to turn our telescreens off.