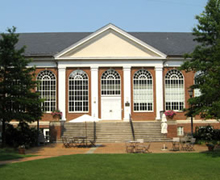 By Anne D. Neal | Baltimore Sun | Maryland’s public honors college charges too much and delivers too little, and prospective students are starting to catch on.

“Please sir, I want some more.”

But the higher ed bubble is bursting, right in our own backyard. And colleges and universities need to take note, to ensure their own survival.

The case in point is St. Mary’s College of Maryland, a 173-year-old public institution tucked between the Potomac River and Chesapeake Bay. After a decade of rising tuition, this public liberal arts college finds itself with 150 empty seats for the incoming freshman class. President Joseph Urgo, who delayed informing faculty and students of the crisis, is apparently surprised. Although he expressed pride, saying “we have a terrific class coming in” and noting its high level of diversity, he did concede, “all of the numbers on this campus are small numbers, so this has a large impact.”

In fact, the problem is that the numbers at St. Mary’s are not small. With an in-state tuition of $14,865, St. Mary’s has the highest tuition of any public university in Maryland, nearly $6,000 more per year than the flagship University of Maryland, College Park, and the fifth-highest in the country.

And what do you get for all that tuition? Not much. The American Council of Trustees and Alumni’s “What Will They Learn?” study gave St. Mary’s core curriculum a D, finding that students could graduate with immense gaps in their skills and knowledge, notwithstanding St. Mary’s claim to be an honors college for the liberal arts.

For tuition of $14,865 a year, students can graduate without exposure to literature, American history or government, foreign language, or composition. Instead, freshmen can pick from a range of trendy seminars including “Pimp My Ride: Materialism in Human Life,” which examines such crucial topics as “Why do we wear our bling on our sleeves?”; Or “Songs of Protest and Social Change,” which explores songs of the 1960s and 1970s; or “Horror Film: Of Monsters and Monstrosities,” which will not only introduce students to late silent era and vampire classics but will also satisfy a requirement for a minor in women, gender, and sexuality studies.

With a mind filled with the knowledge from these courses, who needs literature, composition, foreign language or American history?

Sadly, St. Mary’s is just one of thousands of schools that have made “anything goes” their educational purpose. Rather than investing in matters of direct value to a student’s education, the administrators have tried to be more like slick ad-men and marketers, offering more boutique courses instead of the fundamentals that characterize a college-educated person, ready for the challenges of career and community. And while an array of over-specialized, niche courses may be attractive to faculty, it is much more expensive to staff than a judiciously constructed core that would serve students better.

St. Mary’s suffers from the “more and more” syndrome that “disruptive innovation” expert Clayton Christensen has identified and warned against — a model that has focused on growth and ways to fund it.

But the growth model is no longer applicable. “In all the talk of growth and ‘enhancing quality,'” Mr. Christensen explains, “there was little said about making a college degree more valuable, to compensate for its increasing cost. At some point, the bubble was bound to burst — or at least start to sag.”

Given the dire situation at St. Mary’s, that sagging has begun. And even if the economic picture improves, it’s not realistic to expect students to pay more for degrees that haven’t, on average, increased in earning power for the last decade and that offer dubious educational value. St. Mary’s doesn’t even participate in the Voluntary System of Accountability, so we have no objective measure of how effectively (or not) students learn.

Other institutions risk becoming another St. Mary’s unless they start to adapt to a new world of cost pressures and declining public support, and focus on serving existing students well and reaching out to thousands more who would like to enroll but can’t because of the unaffordable price.

The task is hard, yes, but essential for survival, and it begins with taking a fresh look at what students need to learn from a higher education, with an eye on technology, year-round use and good, old-fashioned cost-effective management. It’s a whole new way of thinking. But as St. Mary’s dilemma suggests, there’s no other choice.