Legalize Pot. Even Though It’s Bad for You? 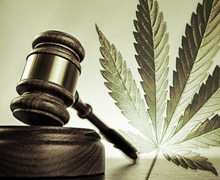 By Gavin McInnes | There is so much smoke surrounding the marijuana debate, it’s almost impossible to see what the hell is going on. The pro-decriminalization crowd will only call it “cannabis” and pretend that it’s an invaluable medicine. The anti-pot crowd calls it a very dangerous drug that will drag America into a basement of failure. They’re both wrong. Ganja is bad for you but that doesn’t mean we need to keep it illegal. As with all drugs, the long-term gains of legalization outweigh the costs of seemingly condoning a vice.

Let’s start with this ridiculous “cannabis as medicine” contention. It’s probably good for giving skinny people the munchies but does anybody truly believe maryjane makes good pain medicine? As I pointed out on O’Reilly, getting a tattoo after smoking a joint is like being murdered with a tiny chainsaw. Pot doesn’t dull pain—it accentuates it. Weed makes everything freakier, which is why driving after a doob makes keeping up with the speed limit feel like NASCAR. It’s also why the Olympics should never consider it a performance-enhancing drug. If anything, you deservemore gold medals if you pulled that off after smoking a blunt. 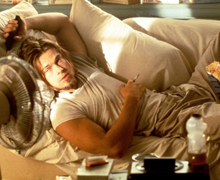 So, the argument ultimately begins with being honest and not pretending that sensimilla is harmless. Back in the 80s and 90s, when I smoked an adequate amount, herb made movies funnier and sex way, way, better. It also killed ambition. The real potheads from my college years are still there. This is because a human being is developing more than just his frontal lobe in his late teens and early twenties. He’s shaping what kind of adult he’s going to become. That’s also why they call those your “formative years.”  If you’re baked out of your mind on the couch from 15 to 25, the odds are you’re never going to get off it. This was true of the cheeba of yesteryear but it is three times as true now that wacky tobaccy is three times as strong. I recently smoked a bowl to test the difference from my days to nowadays and I almost had a panic attack. As I wrote inmy column that week, pot is more like acid now. I had to lie on the cement floor of my office with my shirt off and would have called 911 if I could have felt my hands. It was exactly like a bad acid trip. But just the fact that something makes you feel bad doesn’t mean that it should be illegal. Even Obama knows this. I’ve had hangovers that could be on the local news. That doesn’t mean I need the state to deny my access to Maker’s Mark.

We are living in a “Tread on Me” epoch where anything that hurts someone’s feelings should be banned by the state. We trust the state to take our kids away if we use dirty language in front of them or name them after a seriously terrible guy. Free speech hurts—so let’s ban it. Bullying lead to some suicides,  so let’s trust the authorities to eradicate it entirely. They seem to think they can end terrorism. Why not drugs? Because the government is incapable of virtually everything. The private sector keeps proving that it is better at providing energy, roads, education—and as we’re presently learning, health care. The state has repeatedly demonstrated its incompetence in the drug war, which is  well-documented in the critically acclaimed film The House I Live In. In 2009, we incarcerated 1.9 million people, 1.3 million of whose crimes were drug-related; half of those crimes were related to marijuana. These were fathers leaving children who will eventually learn to repeat their dads’  mistakes. We are creating a nation of single parents where everything is illegal and everyone is at risk of going to jail. In short, the drug war isn’t making us safer. It’s making us criminals.

To legalize drugs, as citizens have successfully done in Portugal, would free a lot more than 1.3 million people. Right now, drug dealers coming in at the ground floor are looking at $10 at McDonald’s an hour—or $100 working for the guy in the fur coat. In truth, drug dealing is a pyramid scheme where there are dozens of losers squeaking by for every kingpin at the top. By legitimizing the top brass’ profession, we take away the kingpin’s bait, and the kid in the ghetto is left deciding between $10 at McDonald’s or $12 at a local marijuana dispensary. The 1.3 million stat above represents clearly defined drug arrests—but how many people are in jail for crimes tangentially related to the drug war?  From the fist fights on the street where one gang has encroached on another’s turf, to the rookie gangster who blows a rival’s head off to establish himself in the gang’s hierarchy, I’d wager we’ve barely begun to understand what legalization would do to our crime level. Gun advocates that say gun control means that only the bad guys get guns. They should be saying the same thing about drugs. Right now only lawbreakers get to try it and only our most immoral sociopaths dare to traffic in it.  Even the drug wars in Mexico right now are the result of the vacuum created when we took out Pablo Escobar. The situation is similar to the gang wars we saw in Chicago during Prohibition. We have already experienced the worst-case scenario. There is nowhere to go but up. If we legalized drugs, the only people left in jail would be a couple of rapists and some nut who murdered his wife. You’d have a few drunken assaults on the weekend but nobody willing to cut your throat out to stop his heroin withdrawals. The demand for drugs isn’t going anywhere, so let’s stop penalizing everyone who steps in to supply them.

In Mexico, the cops couldn’t care less if you smoke a spliff in public. They have bigger problems to deal with—and so do our police. Conservatives seem to think legalizing drugs equals advocating them.  But most Christians see homosexuality as a sin. Very few want to see all the gays thrown in jail. Sin is a part of life and outside of acts of violence, monitoring who does what is between us and God. Isn’t it ironic that the bureaucrat who is telling us what and what isn’t a crime will also throw us in jail if we don’t pay his salary?  Kill that guy.

During my formative years, I traveled the world doing lots and lots of drugs. In Columbia, it’s not unusual to see a mom walking around with a small amount of cocaine in her purse. In Costa Rica, an adolescent will snort a bag before he mows a lawn. Americans used treat it like coffee, until it became a prescription drug in 1914. It wasn’t classified as a Schedule II drug until 1970—after which it quickly became the high du jour. Coke is a strong drug that can turn you into a paranoid douche, but I’m not such a mindless robot that I need bureaucrats to keep me away from it. I did blow for years. Lots of people did. If you threw them all in jail, there’d be no entertainment or fashion or high finance or TV industry. Even a lot of the politicians in Washington use cocaine to maintain the long work hours that it takes to wage the war on drugs.

Speed is a very heavy drug that will age you faster than being president (Kennedy did both) and although it’s great to get work done, speed prevents your heart and brain from rebuilding cells because it prevents real sleep. Meth causes an even more extreme version of this decay. However, both are essentially legal in the form of Adderall—which is even called an “amphetamine” on the bottle. These drugs are already perfectly legal and easy to get (all you have to do to get an Adderall scrip is say that you can’t concentrate at work, and that you tried Ritalin but it didn’t work). We have also legalized heroin. It’s called Oxycontin. The fact that these intense uppers and downers have been accepted into our society with little fanfare while potheads are still going to jail defies all logic.

We need to be empirical about this issue and remove emotion from the equation. We shouldn’t legalize chronic because it’s wonderful. It isn’t. We should legalize it because we don’t need the state to tell us what isn’t wonderful.

In the end, few things are harder on our society than this irresponsible war on drugs. We gave drug prohibition a chance. It has turned the innocent into the guilty and it has made the very guilty very rich. Let’s throw in the towel and stop letting the nanny state run our lives. The government is not better at controlling our behavior than we are. It can’t even build a website.

FTU Note:  If this issue is important or interesting to you, be sure to take our new course “Should Drugs Be Legal?” going live online this Friday.