Is this Free Think University in Reverse? 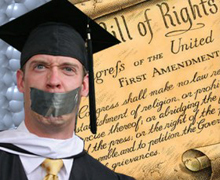 Perhaps nowhere are First Amendment values more imperiled than at the modern American college campus — the very place where free speech should be most dearly cherished and vigorously upheld.

So argues Greg Lukianoff, president of the Foundation for Individual Rights in Education and author of “Unlearning Liberty: Campus Censorship and the End of American Debate,” which was released in paperback this week. 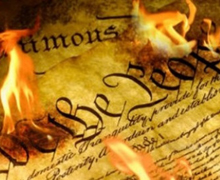 In an exclusive interview with The Daily Caller, Lukianoff spelled out precisely what’s wrong with universities, from the Ivy League to community college — they routinely punish students for even the most harmless and inoffensive speech.

“It’s becoming quite easy to get in trouble for just questioning the administration, depending upon who your university president or administrators are,” Lukianoff told The DC.

Many people have the wrong impression about the state of discourse in academia, falsely believing that Supreme Court decisions settled the matter decades ago. While it is true that courts have consistently upheld college students’ First Amendment rights, the rulings have not stopped enthusiastic censors at both private and public universities from criminalizing free speech, said Lukianoff.

Sadly, society isn’t paying enough attention. When Lukianoff tells people of the plight of the modern college campus, he often hears the opinion that the censorship is acceptable because it’s well-intentioned — an idea that “just scares me to death,” he said.

“A previous generation, if you told them you were going to get in trouble for your opinion on college campuses, the generation of the 60s and the 70s, it was completely outrageous to them,” he said. “You didn’t have to explain why it was a big deal. Now when I go to campuses I hear a lot more from students saying, ‘Well it’s well-intentioned… it’s not that big of a deal.’”

The assertion that censorship is usually well-intentioned is simply false, said Lukianoff. FIRE has covered numerous cases where vindictive administrators cracked down on students specifically because they were publicizing harsh truths or uncomfortable details about the university.

Administrative bloat is partly to blame. Though faculty salaries and employment levels have remained largely steady–or even fallen–the ranks of the bureaucratic class has grown exponentially at universities. A report by the American Institutes for Research found that “on most college campuses, the majority of workers are not teaching students.”

What are all these low and mid-level administrators doing instead? Many of them are censoring students.

An illustrative case is the one from Modesto Junior College, where an administrator and campus security officer barred a student from handing out copies of the Constitution on Constitution days — violating the explicit free speech precepts found in America’s governing document.