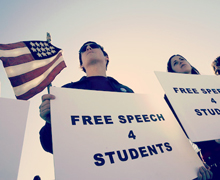 By Danielle Charette | American universities ought to be some of the freest places in the world. Instead, aggressive political correctness reigns.

These days, academic free speech is passé. It’s far more hip to deny accomplished leaders the chance to address campus. This May, illiberal activists at Rutgers, Smith, Brandeis, and Haverford all managed to turn away their graduation speakers. American universities ought to be some of the freest places in the world. Instead, aggressive political correctness reigns.

Those of us who still defend the right to vigorously debate and freely associate are often derided as either hicks who took high school civics too seriously or elitists set on preserving our own power. As a student at Swarthmore College, I’ve been associated with both stereotypes. 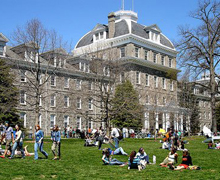 Four years ago, my friend Tyler Becker and I arrived at orientation and discovered that Swarthmore had no conservative or libertarian clubs. Undaunted, we decided to found our own, and I paid for a series of flyers to advertise our new classical liberal group. Within twenty-four hours, the hundred or so flyers I’d distributed were gone—and replaced with parodies mocking me as someone who wanted to deny others their “basic rights.” The irony, of course, is that I had just had my right to speech grossly violated.

The whole incident created a Facebook fracas, with upperclassmen publicly posting that I was just a misguided freshman who would transfer to a “midwestern Christian college” in no time. After a few weeks of dithering, the dean of students, Liz Braun, issued an email stating her “concern” that such censorship had taken place. But, in a popularly received editorial, two students shot back at the administration.

“Dean Braun’s email,” the students wrote in Swarthmore’s online paper, “represents the protection of extremism, the silencing of attempts to address such ignorance, and the astoundingly easy manner in which the administration has been maneuvered to speak in defense of this group.” As they saw it, “The issue here is how a student group representing extreme views can blitz the campus with its message, then run to the administration when the all-too-predictable backlash occurs—and then find shelter from the administration!” The pair dismissed tolerance for different points of view as “reactionary” and nothing more than “a shield to hide behind.”

In this conspiratorial retelling, my friend and I had anticipated that our flyers would be defaced, torn down, and parodied in a grand scheme to win the administration’s protection. Alas, if that was our plan, it didn’t turn out very well.

Last spring, members of our ISI-affiliated Conservative Society attended an open Board of Managers meeting to express our reservations about the student movement demanding that Swarthmore divest its $1.5 billion endowment of fossil-fuel companies. When the meeting was hijacked by student activists and the moderator made no effort to reassert order, I appealed to Swarthmore’s president, Rebecca Chopp, and Dean Braun, both seated in the front row. They said there was nothing they could do. So much for being shielded by the administration.

Having gotten word of polarizing protests like these, Robert George, a proud Swarthmore alum and well-known conservative professor at Princeton, reached out to our college’s President’s Office. George has experience teaching a popular Princeton seminar with friend and colleague Cornel West, a professor of African American Studies and the honorary chair of the Democratic Socialists of America. George and West proposed to visit campus and share their insights from years of teaching together despite their profound ideological differences. Their discussion, titled “The Bond of Truth Seeking,” was designed to inspire students to work through disagreements while still engaging tough questions about the liberal arts.

Unfortunately, an event intended to build unity quickly bred its own controversies. Students and faculty fixated on George’s opposition to gay marriage as an example of “hate speech” and accused West of being “deeply selfish” for providing George a platform. Protestors distributed leaflets that read, “Building community requires eradicating” views like George’s. “We don’t want mere tolerance; we want to fight oppression.” According to these activists, tolerance for George (and West) “actually protects the already established machinery of discrimination.” In this view, free speech is a zero-sum game. If conservatives are allowed to express themselves, someone else is being discriminated against; therefore, the only justifiable response is silencing disfavored speech.

This is the same warped thinking that motivated Harvard student Sandra Y. L. Korn’s editorial in the Crimson calling on colleges to abandon academic freedom in favor of “academic justice.” And it’s the same mind-set that was on display at Brown when student demonstrators shouted down former NYPD commissioner Ray Kelly. Both the Kelly controversy and Korn’s editorial were widely derided in both the mainstream and conservative press, but I’m sad to report that they reflect a commonplace attitude at America’s most prestigious colleges. According to many of my peers—and professors—the notion that academia is the “marketplace of ideas” is just a bunch of capitalist claptrap. Instead, students are taught that college is four years of preparation in social justice; meaningful debate on issues like gay marriage, climate change, and Title IX law only hinder the coming revolution.

After the George-West forum, three Swarthmore professors took to the college weekly, The Phoenix, to denounce George’s appearance on campus. No faculty defended the event.

So, as Lenin might put it, What is to be done?

My advice is that students heterodox enough to still believe in free debate take a page out of Tom Paine’s playbook. That is, start meeting, and start writing. In addition to the Conservative Society, my peers and I founded the Swarthmore Independent, an online publication supported by ISI’s student journalism program, the Collegiate Network. The Independent frequently pressures the Swarthmore administration to uphold all students’ free speech and due process rights. Rather cheekily, we refer to ourselves as the “true campus counterculture.” At a school somewhat notorious for its hippies and hipsters, we’re crazy enough to stand by James Madison’s constitutional principles. We’re known for actually reading the student handbook and embarrassing administrators when they break their own stated policies.

Although it can be nearly impossible to redirect campus discourse as an individual, it is invigorating to do so as a group. In one upsetting episode, a friend of mine wrote an article explaining why he didn’t think it was a contradiction that he identified as both gay and conservative. Sadly, the campus’s most prominent queer leaders took to social media to smear my friend as “an admissions mistake.” I’m proud that our Conservative Society rallied behind my friend and urged him to ignore Swarthmore’s set of cyber bullies.

The final saving grace is humor. Sanctimonious campus censors aren’t very fond of it, but for the rest of us, a good laugh is quite liberating.

One of the Independent’s reporters, Paige Willey, sparked predictable outrage when she attended a campus workshop on “Fat Justice” and expressed her opinion that the feminist speakers—who complained about the “ongoing exploitation and oppression of fat people” at the hands of “the patriarchy”—were sorely misguided. One of the organizers lambasted Paige for violating basic journalism ethics. Paige’s offense? She didn’t ask permission to write about their public event. We joked that Woodward and Bernstein didn’t ask Nixon’s permission to report on Watergate.

Fortunately, we had both humor and the First Amendment on our side. And so do you.