How has Houston Trampled Religious Liberty with New Policy? 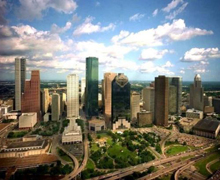 By Andrew Branch | In what some are calling a sham proceeding, Houston leaders on Wednesday approved an Equal Rights Ordinance that adds the LGBT community to the city’s nondiscrimination laws. Supporters claim it provides necessary protections for the city’s lesbian, gay, bisexual, and transgendered residents. But religious liberty experts warn it could be used to force churches, colleges, and Christian-owned businesses to act against their biblical beliefs about sexuality.

The ordinance, which takes effect in 30 days, passed the Houston City Council 11-6, and local television news broadcast the LGBT supporters’ jubilation. Reports said fewer than 30 people out of more than 200 in attendance spoke against the measure, but they failed to mention that more than 150 pastors and pro-family advocates felt so disrespected by the proceedings that they staged a walkout early in the meeting. 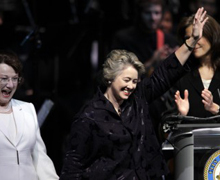 Houston Mayor Annise Parker, center, walks onto the stage with her partner, Kathy Hubbard, during her public inauguration ceremony.

Mayor Annise Parker, a lesbian, attempted to “stack the deck” against critics, said Jonathan Saenz, director of the conservative group Texas Values. The council moved homosexual activists to the front of the speaking line, denied pro-family African-American pastors the same courtesy, then moved more homosexual activists to the front. The pastors described the move as “flagrantly disrespectful,” Texas Values reported, equating it to being “sent to the back of the bus.” As much as half the room walked out, Saenz said.

Houston joined nearly 200 cities and counties nationwide with similar ordinances, and gave LGBT activists a clean sweep among major Texas cities. San Antonio passed a similar measure that was heavily disputed last year in the conservative state. Parker said passing her city’s ordinance was the “most personally meaningful thing I will do as mayor.”

Supporters say the measure offers local protections against all forms of discrimination in housing, employment, and services provided by private businesses. “If Houston wants to be considered a community that values all of its citizens, this ordinance should be passed today,” said Robert Brewer, a Houston attorney who identified himself as gay. Violating the ordinance is a Class C misdemeanor, carrying a $5,000 maximum fine. Cases would be tried in municipal court.

For example, Parker removed a section of the ordinance explicitly criminalizing those who refuse to open restrooms to the opposite sex unless they have a “good faith” reason. But a different section bans all discrimination in public accommodation. “The mayor admitted this and so did the city attorney, that the ordinance can still be used to prosecute people on the bathroom issue,” Saenz said. The adopted ordinance removed the “good faith” defense for those who stop people from entering the wrong bathroom when they do not appear or act transgendered.

The ordinance also bans discrimination among employers and in housing. The final version of San Antonio’s ordinance omitted the sweeping ban on city officials of the “demonstration of a bias, by word or deed,” a clause that caused religious liberty advocates the most concern. It also gave more clear, defined religious exemptions, even if they are problematic, Mateer said. But Houston’s exemptions are limited and ultimately “clear as mud.” Mateer said he believes some Christian bookstores and even church organizations, like a church-run coffee shop that’s open to the public and donates its profits, would not be exempt.

The law also could prevent colleges from upholding their sexual conduct requirements. Religious colleges can restrict housing to church membership “unless membership in the religion is restricted because of a protected characteristic,” according to the ordinance.

Liberty Institute lawyers have been looking at the various ordinance proposals for two weeks, and they’re still “scratching their heads,” Mateer said. For example, the ordinance defines religion as “all aspects of religious observance and practice, as well as belief.” By banning itself from discriminating on the basis of religion when seeking city contractors and banning contractors from discriminating on the basis of sexual choices, the city explicitly encoded a contradiction. “It is just so poorly drafted,” Mateer said.

San Antonio’s law, when published several days after the September vote, turned out to be a watered-down version of what initially was presented to the public. Mateer said he knew of no complaints filed so far, and the law cannot be challenged on its face as blatantly unconstitutional. “In Houston, we’re seriously considering that,” he said. The Houston city code also allows opponents to collect signatures to place a repeal measure on the November ballot, and many have pledged to do so.