Gay Activists have Met their Match with Muslim Barbers 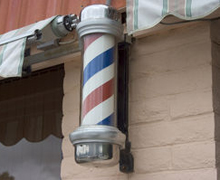 By Ezra Levant | So a lesbian walks into a Muslim barbershop, and asks for a “businessmen’s haircut”.

It sounds like the beginning of a joke, but it really happened, and now a government agency called the Human Rights Tribunal of Ontario will hear her complaint.

Faith McGregor is the lesbian who doesn’t like the girly cuts that they do at a salon. She wants the boy’s hairdo.

Omar Mahrouk is the owner of the Terminal Barber Shop in Toronto. He follows Shariah law, so he thinks women have cooties. As Mahrouk and the other barbers there say, they don’t believe in touching women other than their own wives. 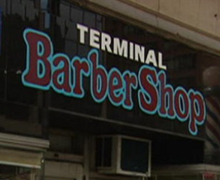 But that’s what multiculturalism and unlimited immigration from illiberal countries means. A central pillar of many immigrant cultures is the second-class citizenship of women and gays.

So if we now believe in multiculturalism, and that our Canadian culture of tolerance isn’t any better than the Shariah culture of sex crimes and gender apartheid, who are we to complain when Omar Mahrouk takes us up on our promise that he can continue to practise his culture — lesbian haircuts be damned?

He’s not the one who passed the Multiculturalism Act, and invited in hundreds of thousands of immigrants with medieval attitudes towards women and gays and Jews, etc. We did.

Mahrouk’s view is illiberal. But in Canada we believe in property rights and freedom of association — and in this case, freedom of religion, too.

But McGregor ran to the Human Rights Tribunal and demanded that Mahrouk give her a haircut.

In recent years, Canadian human rights commissions have weighed a complaint about a women’s-only health club that refused a pre-operative transsexual male who wanted to change in the locker rooms.

They’ve ordered bed and breakfasts owned by Christian families to take in gay couples. They’ve censored pastors and priests who have criticized gay marriage. Gays win, because it’s a test of who is most outraged and offended.

But in the case of the Muslim barbers, the gay activists have met their match. If the test is who can be the most offended or most politically correct, a lesbian’s just not going to cut it.

A white, Christian male has the lowest hand — it’s like he’s got just one high card, maybe an ace. So almost everyone trumps him.

A white woman is just a bit higher — like a pair of twos. Enough to beat a white man, but not much more.

A gay man is like having two pairs in poker.

A black lesbian is a full house — pretty tough to beat.

Unless she’s also in a wheelchair, which means she’s pretty much a straight flush.

The only person who could trump that would be a royal flush. If the late Sammy Davis Jr. — who was black, Jewish and half-blind — were to convert to Islam and discover he was 1/64th Aboriginal.

So which is a better hand: A lesbian who wants a haircut or a Muslim who doesn’t want to give it to her?

If I were a gay activist, I’d probably want to declare victory and shut down these human rights commissions right now.

In five years time, it won’t be gay activists forcing themselves into Christian B&Bs. It’ll be Muslim activists vetoing the gay pride parade.