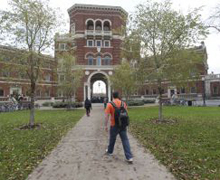 The latest is an Oregon plan that would keep students at public colleges completely out of traditional loans. Once Oregon’s Higher Education Coordinating Commission works out the final details for the pilot program, students will be able to complete all of their college education without paying anything up front. The plan’s designers hope it will give students a way to go through college without being crushed by debt.

But the education is far from free-the bill comes due after graduation. As compensation for the “free” education, the government will take 3 percent of everything a participating student earns each year for up to 25 years.

This compulsory payment will continue regardless of income level and total dollars already paid. Those who earn higher incomes can’t choose to pay more and be free before the time is up. Alternately, people earning less money will not have flexibility with their rates, either.

“This is going to happen because students demand change,” said Steve Hughes, state director of the Oregon Working Families Party. “The conditions are just absolutely ripe for this. We’ve heard so many stories of student debt that are just beyond belief.”

The idea originated in a class called “Student Debt: Economics, Policy and Advocacy,” at Portland State University. The class took a proposal to lawmakers who wrote the legislation for the program and passed the bill unanimously, all in less than a year. Oregon still needs to figure out where it will get the $9 billion it needs for startup costs. The legislature also has to approve the final plan developed by the Higher Education Coordinating Commission.

For students expecting to earn low salaries, a percentage payment system lets them pay far less than they would with a loan-they never have to pay back a specific dollar amount. Until the commission writes guidelines, other students won’t really know if the plan makes sense for them. Potentially high-earning students may not want to sign a contract committing them to pay 3 percent of their earnings for decades. But if they don’t, it’s hard to see how the program would remain financially viable. Time will tell.