We’re Drunk…, But Not on Corn Whiskey 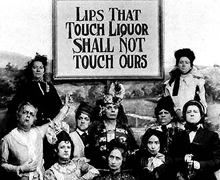 By Anthony Esolen | In October, 1919, a heavily “progressive” Congress passed the Volstead Act enforcing the Eighteenth Amendment, prohibiting, for almost all purposes, the production, sale, and distribution of alcoholic beverages. There are two things everybody has learned from Prohibition. First, it is wrong to try to legislate morality. Second, you cannot do it, for Prohibition failed. But neither of these things is true, and the real lessons of Prohibition go unheeded.

First, law is nothing if not the codification of morality. All laws bear some relation, however distant, to a moral evaluation of good and bad. We cannot escape making moral distinctions. One man’s theft is another man’s redistribution of income. One man’s defense of family honor is another man’s murder. Even people who reduce law to utilitarian calculations cannot evade this truth. They may say, “It is useful to refrain from stealing, because then everyone’s goods will be secure,” appealing to self-interest. But why should security be prized higher than the thrill of danger? And how can mere usefulness bind my conscience? A man may fight to the death for justice, and to hell with utility.

Second, if Prohibition was intended to curtail hard drinking, it did work. It’s always easier to look at something that happened than to imagine what would have happened but didn’t. Most people obeyed the law. Of course there were speakeasies and bootleggers. The Kennedy family made their fortune on illegal whiskey. But there wasn’t a speakeasy on every street or a still in every backyard. Actuarial tables show that, shortly after Prohibition began, deaths from cirrhosis of the liver dropped considerably, and continued to drop through the twenties, leveling off by the time Prohibition was repealed in 1933. After all, Prohibition did enjoy some wide support. Billy Sunday, baseball player and itinerant preacher, campaigned for it. Even Irish Catholics were not uniformly in opposition. I recall a photograph of a parade held in my coal-mining town in 1918, to celebrate the armistice. Prominent were the Knights of Father Mathew, an Irish temperance society.

So, then, what does Prohibition teach us?

Granted, Prohibition addressed problems that certainly needed solving. Prohibition was sold, in large part, as a measure to protect women and children from alcoholic husbands and fathers. An evil-tempered workingman, coming home drunk after a day underground with a pickax or on the railroad with a sledgehammer, might beat his wife and children, or he might already have drunk half his money away.

But the avenue chosen was too problematic. It was an attempt to call on the national government, that lumbering giant, as Big Daddy to keep little daddy in his place. It was a national “answer” for a local problem, even a domestic problem, as if one were to ask the United Nations to impose a curfew on one’s teenager. That was a first in American history. Indeed, the people who campaigned for Prohibition knew it was so, else they would not have taken the extraordinary trouble to pass a constitutional amendment. Prohibition was repealed, but the precedent was not. Now we expect the national government to look to local problems, even domestic problems. No one blinks when that same government decides what goes on in your child’s classroom and what kind of Christmas display you can have in your borough building. Prohibition set the stage for national scrutiny of the folkways of everyday life.

Statists will appeal to the “general welfare” clause in the Constitution, but the context there is federalist: “general, in relation to the states.” A railroad from New York to California falls under the heading of general welfare, since it involves many states directly and all the states indirectly. But now, “general” means “diffuse,” and “welfare” means “welfare as defined by somebody fretting in a household,” or, “welfare as defined by your social and intellectual keepers.” The Welfare State justifies itself by filling the role abandoned by bad fathers, and then ensures that there will be as many bad fathers as possible, weakening the authority of all responsible parents in the process. It requires irony beyond my reserve—and I think my well is far from dry—to do justice to the harm caused to families with dependent children by Aid to Families with Dependent Children.

The need to enforce Prohibition gave rise to two things, both bad. One was a vast network of organized crime, because, although most people obeyed the law, many did not. The other was a vast network of organized police forces to fight the crime. Both have long survived the repeal of Prohibition. All organizations are, in one respect, like natural organisms. Their prime directive is to survive. Here the crime fighters had a big advantage over the criminals. Crime families reproduce; but bureaucracies metastasize. Each new crime family is a rival to the others, but each new federal agency is a tentacle and a feeder of the others. During Prohibition, Al Capone was a match for Eliot Ness, in power and in numbers. Now, a John Gotti is but a flea on the elephant’s hide. The average person suffers far greater encroachment upon his liberty, and far greater extortion of his earnings, from the elephant than from the flea.

So, Prohibition was a bad law because it was just what one of its supporters, Herbert Hoover, said it was: “A noble experiment.” It parted from American tradition. It nullified local customs and ordinances. It cleared a gravel path from the hearth to the Capitol—and began to pave a twelve-lane superhighway from the Capitol to the hearth, for that is the direction of most of the traffic. It was a bad law because of its immediate and dreadful unintended consequences.

And it was a bad law for the most obvious reason of all. It appealed to public welfare to outlaw something that was, in itself, not evil. Why do people miss this? Most people agree that drunkenness is an evil; but wine “gladdens the heart,” says the Psalmist, and Jesus at Cana did not turn wine into water. People would take a drink not to get drunk, but for conviviality and ease. What was so wrong with that?

So Prohibition is not analogous to laws against pornography. I oppose the spread of pornographic films not simply because these films ruin families and individual lives, but because pornography is itself evil, turning the human body and the marital act into impersonal objects of consumption. Nor is it analogous to laws against artificial contraception. You can’t hang a jug of apple juice outside for two weeks and end up with estrogen. There were no social customs built upon the trading of spermicides. Catholics opposed the pill because they believed its use was inherently wrong; others, because its use would be the direct, foreseeable, and widespread cause of a breakdown of sexual mores (and they were right). But the judges determined that they would rule from above. Prohibition wasn’t wrong because it simply prohibited. It was wrong because of what it prohibited (something inherently innocent, domestic, and local), who was doing the prohibiting (the national government), and how (via a new constitutional principle, and a national police force).

We have, then, the worst of both worlds. We have a Prohibitionary State that gives license to all kinds of evil, but that regulates and restricts actions that are not evil, to manage the chaos that results from the license. This is done without a glance at the Constitution, which was not a dead letter in the days of the Volstead Act, but is now.