Does This Gun Come in Pink? 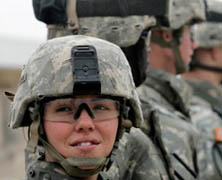 Recently, Defense Secretary Leon Panetta lifted the official ban on women serving in combat.  The military is often a social experimentation lab for our government, and this is no exception.  Apart from the obvious concern for the lives of the women sent into these newly allowed assignments, other concerns are being raised as well.  There are good reasons why no culture of the past has suited up its women and sent them off to fight.  Casting aside this inherited wisdom may have dire consequences.

Our military has already for some time now allowed women to serve in air and sea combat operations and certain ground units that can be dangerous.  800 women have been injured in Iraq and Afganhistan and more than 130 have died.  But direct ground combat has not been allowed until now.  But it was only about a year ago that the Defense Department opened up 14,500 more positions previously reserved for men and also began permitting women to live with their combat units.

Now the military must ask the Sec. of Defense for “exceptions” if a job is deemed impossible for a woman to fulfill.  Many military commanders believe this will lead to a lowering of standards rather than a proliferation of exceptions.  Gen. Martin Dempsey, the chairman of the Joint Chiefs of Staff, acknowledges that commanders must justify why any woman might be excluded and, if women can’t meet any unit’s standard, the Pentagon will ask: “Does it really have to be that high?”

A recent article in the Marine Corps Gazette, by Captain Katie Petronio entitled, “Get Over It! We Are Not All Created Equal” states: “I understand that there are female service members who have proven themselves to be physically, mentally, and morally capable of leading and executing combat-type operations; as a result, some of these Marines may feel qualified for the chance of taking on the role of [Infantry Officer]. In the end, my main concern is not whether women are capable of conducting combat operations, as we have already proven that we can hold our own in some very difficult combat situations; instead, my main concern is a question of longevity. Can women endure the physical and physiological rigors of sustained combat operations, and are we willing to accept the attrition and medical issues that go along with integration?” She goes on to build the case that she herself could have made a bid to pass the Infantry Officer Course, but then concludes by saying, “I can say from firsthand experience in Iraq and Afghanistan, and not just emotion, that we haven’t even begun to analyze and comprehend the gender-specific medical issues and overall physical toll continuous combat operations will have on females.”

There are many questions left unasked and unanswered after this recent decision by Mr. Paneta.  Let us hope the answers come from somewhere other than the actual battlefield.