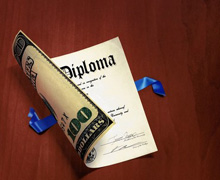 By Glenn Harlan Reynolds | For Too Many Americans, College Today Isn’t Worth It.

In the field of higher education, reality is outrunning parody. A recent feature on the satire website the Onion proclaimed, “30-Year-Old Has Earned $11 More Than He Would Have Without College Education.” Allowing for tuition, interest on student loans, and four years of foregone income while in school, the fictional student “Patrick Moorhouse” wasn’t much better off. His years of stress and study, the article japed, “have been more or less a financial wash.”

“Patrick” shouldn’t feel too bad. Many college graduates would be happy to be $11 ahead instead of thousands, or hundreds of thousands, behind. The credit-driven higher education bubble of the past several decades has left legions of students deep in debt without improving their job prospects. To make college a good value again, today’s parents and students need to be skeptical, frugal and demanding. There is no single solution to what ails higher education in the U.S., but changes are beginning to emerge, from outsourcing to online education, and they could transform the system.

The higher education bubble really began in the 1970s, as colleges that had expanded to serve the baby boom saw the tide of students threatening to ebb. Congress came to the rescue with federally funded student aid, like Pell Grants and, in vastly greater dollar amounts, student loans.

Predictably enough, this financial assistance led colleges and universities to raise tuition and fees to absorb the resources now available to their students. As University of Michigan economics and finance professor Mark Perry has calculated, tuition for all universities, public and private, increased from 1978 to 2011 at an annual rate of 7.45%. By comparison, health-care costs increased by only 5.8%, and housing, notwithstanding the bubble, increased at 4.3%. Family incomes, on the other hand, barely kept up with the consumer-price index, which grew at an annual rate of 3.8%.

For many families, the gap between soaring tuition costs and stagnant incomes was filled by debt. Today’s average student debt of $29,400 may not sound overwhelming, but many students, especially at private and out-of-state colleges, end up owing much more, often more than $100,000. At the same time, four in 10 college graduates, according to a recent Gallup study, wind up in jobs that don’t require a college degree.

Students and parents have started to reject this unsustainable arrangement, and colleges and universities have felt the impact. More than a quarter of private institutions have suffered a drop of 10% or more.  Even elite institutions haven’t been spared, as schools such as Haverford, Morehouse and Wellesley have seen their credit ratings downgraded by Moody’s over doubts about the viability of their high tuition/high overhead business models.

America’s higher education problem calls for both wiser choices by families and better value from schools. For some students, this will mean choosing a major carefully (opting for a more practical area of study, like engineering over the humanities), going to a less expensive community college or skipping college altogether to learn a trade.

For their part, schools must adjust to the new economic reality, as some already have. Some have cut tuition and others are offering hidden discounts in the form of increased financial aid. A recent survey found that for the fall of 2013, the average “tuition discount rate” for incoming freshmen (that is, the reduction of the list price through grants and scholarships) hit an all-time high of 45%.

Most of the growth in higher education costs, according to a 2010 study by the Goldwater Institute, a libertarian think tank, comes from administrative bloat, with administrative staff growing at more than twice the rate of instructional staff.

Under financial pressure, many schools have already farmed out the teaching of classes to low-paid adjuncts who have no job security and often no benefits.

This approach could be extended to administration, replacing salaried employees with low-paid “adjunct administrators” to handle routine functions. Many in the corporate world have reaped considerable savings by outsourcing back-office functions, and there is no reason this approach can’t work in higher education.

Another reform that would be useful at both public and private institutions is budget transparency. University finances are notoriously Byzantine, and administrators generally like it that way. But change is afoot here too.

New instructional methods can also contribute to cost savings. Online courses are already making inroads, and the model makes intuitive sense for many subjects: Take the top teachers in a field and give online access to their lectures to students at many different colleges. There isn’t a lot of one-on-one interaction in such courses, but how much genuine interaction is there in a live 200-student lecture class?

Once students have acquired basic instruction in larger, less personal classes, they can apply it in smaller advanced classes, where they would deal with faculty face to face. This approach is already used to great effect by the popular Khan Academy, a sophisticated not-for-profit website where primary and secondary students view lectures at their convenience and perfect their skills through video-game-like software. Students can then use classroom time to work through problems with teachers and apply what they have learned. The idea is to take advantage of mass delivery where it works best and to allow individualized attention where it helps most.

Another alternative, already beginning to get some traction, lies in the rise of various certification systems. A college degree is often used by employers as an indication that its holder has a reasonable ability to read, write, show up on time and deal with others. But many employers are unhappy with the skills that today’s graduates possess.

This has led to the rise of certification schemes from within the higher education world, including the revised Collegiate Learning Assessment (CLA+) and ACT’s WorkKeys, which is explicitly aimed at employment skills. Manufacturing companies are working with online schools and community colleges to create “stackable certificates” that vouch for specific competencies. Such programs may someday bypass higher education entirely, testing and certifying people’s skills regardless of how they obtained them.

But what about the “college experience”—late-night dorm bull sessions, partying and pizza? Won’t it be ruined by these new approaches to instruction? Not necessarily.

We may eventually see the rise of “hoteling” for college students whose courses are done primarily online. Build a nice campus—or buy one, from a defunct traditional school—put in a lot of amenities, but don’t bother hiring faculty: Just bring in your courses online, with engineering from Georgia Tech, arts and literature from Yale, business from Stanford and so on. Hire some unemployed Ph.D.s as tutors (there will be plenty around, available at bargain-basement rates) and offer an unbundled experience. It’s a business model that just might work, especially in geographic locations students favor. Grand Cayman is awfully nice this time of year.

None of these alternatives to a traditional university degree is “the answer” to the higher education bubble. And we certainly shouldn’t discard entirely the old-fashioned approach to college, whatever its shortcomings. A rigorous liberal arts education, with an emphasis on reading carefully and writing clearly, remains a tremendous asset, for employment as for citizenship.

The economist Herbert Stein once said that if something can’t go on forever, it will stop. The pattern of the last few decades, in which higher education costs grew much faster than incomes, with the difference made up by borrowing, can’t go on forever. As students and parents begin to apply the brakes, colleges need to find ways to make that stop a smooth one rather than a crash.