Bigger is Not Necessarily Better in Information-Rich Digital Economy 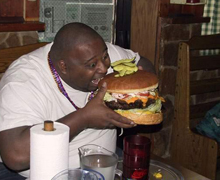 By Irving Wladawsky-Berger | I recently read an intriguing column, The End of Mass Production, by technology author and columnist Kevin Maney.  I first met Maney several years ago when he was at USA Today, and have always enjoyed his columns and books.

The mass production of standardized products is a defining hallmark of the 20th century industrial economy, bringing high productivity and low costs to a wide variety of products, from household appliances to cars.  But, according to Maney, another mass-related concept became a hallmark of the second half of the 20th century, – the hotel chain.   “Hotel chains grew out of a lack of information,” he explains.

“In the middle of last century, cars and highways made the world far more mobile.  Many more people traveled to towns they didn’t know, and they needed places to sleep.  They had no way to know which hotel or boarding house might be nice or offer amenities they wanted.  Travel guides, like Mobil’s, popped up in the 1950s, but for the most part information remained scarce.”

“Chains took advantage of that data deficit.  If you knew a Holiday Inn in one town, you knew the Holiday Inn in the next town would be roughly the same. The brand’s motto played off this: The best surprise is no surprise.  The uniformity and comfort of a chain trumped the risk of an unknown, independent place.” 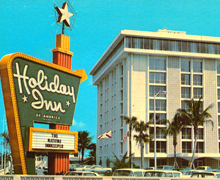 Not surprisingly, things are now changing in our information-rich digital economy.  “Information technology is eroding the power of large-scale mass production.  We’re instead moving toward a world of massive numbers of small producers offering unique stuff – and of consumers who reject mass-produced stuff.  The Internet, software, 3D printing, social networks, cloud computing and other technologies are making this economically feasible – in fact, desirable.”

His column focuses on Airbnb, the online community marketplace where individuals list, find, and book accommodations around the world.   Airbnb was founded in 2008 and already lists over 600,000 accommodations in 34,000 cities and 192 countries, including close to 35,000 in New York and 21,000 in Paris.

Airbnb is expected to become the world’s largest hotelier sometime this year.  It’s hard to tell how big a competitive threat this might represent to the major hotel chains, especially to those primarily catering to business customers.  However, the chains are paying attention, and have been busy developing a variety of boutique hotels, each targeted at a different customer segment.  Instead of the vanilla sameness of the industrial-age hotel chains, they are trying to offer their customers a more unique, personalized experience.

“[T]he underlying story of Airbnb, information and the major hotels will get replayed in lots of industries in the next few years,” writes Maney. “Mass production and sameness mean safety when information, intimacy and trust don’t exist.  As information, delivered globally and cheaply over the Internet, brings back intimacy and trust, the advantage of uniformity at scale slips away.”

This is all part of a major trend which entrepreneur and VC Hemant Taneja called the Economies of Unscale: Why Business Has Never Been Easier for the Little Guy in a recent HBR blog.  “A series of breakthrough technologies and new business models are destroying the old rule that bigger is better,” he wrote.  “By exploiting the vast (but cheap) audience afforded by the Internet, and taking advantage of a host of modular services, small becomes the new big.  The global business environment is decomposing into smaller yet more profitable markets, so businesses can no longer rely on scaling up to compete, but must instead embrace a new economies of unscale.”

Unscaling is made possible by the number of Internet-based platforms and cloud-based services and tools now available to startups and small businesses in general.  New companies can now be launched without a massive investment in personnel and IT infrastructure.  They can quickly get to market, and compete effectively with far larger companies.  Mobile Internet platforms, in particular, make it easier and cheaper to experiment in the marketplace.  While most such experiments will likely fail, some, like Airbnb, will succeed and can then quickly scale up their capabilities as their businesses grow.

Last year, Deloitte’s Center for the Edge published a report, The Burdens of the Past, which sheds light on why unscaling could turn into a major disruption to established companies.  The report is focused on the growing gap in technology adoption between individuals and institutions.  It notes that individuals are harnessing the enormous power of technological advances and the information flows they unleash in all kinds of ways in their personal lives.  The more entrepreneurial among them are leveraging these new technologies and knowledge-sharing platforms to develop innovative products and services, and to start new companies and bring their innovations to market.

While a few leading edge companies are able to keep up, the vast majority of traditional firms are lagging behind.  They are not able to embrace these disruptive technologies and innovations at anywhere the same speeds.  These companies are working harder than ever, trying to achieve greater efficiencies and predictability.  They keep trying to fit new technologies and practices into outdated business models.  They are holding on to strategies that worked well in the relatively stable business environments of the industrial economy, but fall short in our fast changing digital economy, where new products, business models and competitors keep emerging from all corners of the worlds.

Everyone talks about the need to become more flexible and agile, but many companies have trouble doing so.  The Deloitte study cites a number of strategy and financial barriers uncovered in their research.  But in the end, they suspect that “a more fundamental force may be at work: the historical value accorded to efficiency and controllability by businesses accustomed to a less changeable, less transparent world. . . Simply put, there is a growing mismatch between the old frameworks and practices that many companies use and the structures and capabilities required to be successful in a rapidly changing environment.  Legacy corporate practices are holding businesses back from fully participating in new opportunities.”

“These new economies of unscale will be good for job growth, because they open up thousands of new market niches for exploitation,” writes Taneja.  “By buying specialized services, in customized form and at modest cost, companies can create unique products, find buyers from across the world, and secure profits.  It doesn’t matter if a designer wants to build polka dot bird feeders — there is a hyper-niche market they can tap, using platforms like Etsy to sell it across the world.  To succeed though, we first have to unlearn what we have been taught about business: We have to think in an unscaled mindset, where the emphasis is on a greater number of specialized products sold to customers who know exactly what they need.  How we train our students for this world will be critical to securing their future employment.”

I truly hope he’s right.  We need to become a much more entrepreneurial society.  Global competition continues to drive large companies to aggressively focus on productivity, leveraging IT-based innovations to get their work done with fewer employees.  Governments will continue to shed jobs given the pressures they face to reduce costs and slim down.  Large numbers of people will have to no choice but to invent their own jobs, based on new types of work organizations that leverage digital markets and platforms.  Hopefully, the unscaling trend can be part of the answer.

“It has been a tough few years for workers in the United States,” writes Taneja in his hopeful conclusion.  “But in a world with economies of unscale, we are empowered to take advantage of an extensive array of new, amazing services to build sustainable companies.  The coming world is a world of fragmented niches, many with immense profit potential, as we start to discover products that better meet the needs of this varied world.  Finally, the American worker is about to get a break.”