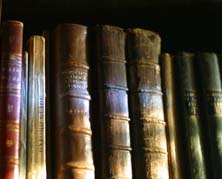 By Jerome C. Foss | Politics students at Saint Vincent College benefit from the emphasis on studying original works, not textbooks. | As the fall semester came to an end, I was reminded of the importance of teaching politics through primary sources. While grading my finals I received one of those gratifying emails from a student who had just completed my Principles of American Government course.

On his way home for the Christmas holiday, this student (we’ll call him Adam) was passed on the road by a car bearing a bumper sticker that read, “Stop Complaining. Start a Revolution.”  Adam reported that he was upset by the thoughtlessness of such a sentiment. If we had a revolution every time something bothered us, Adam expressed, we’d constantly be undermining people’s reverence for the Constitution and the rule of law: “I wanted to roll my window down and yell at this guy to read Federalist 49.”

What was impressive in Adam’s response was the connection he drew between a puerile bumper sticker and James Madison’s fear of frequent constitutional conventions. Adam was applying things he had learned in class to ideas that confronted him in his everyday life. Even though Adam is not majoring in Politics (much to my regret), he has clearly benefited from the primary-source emphasis our department at Saint Vincent College has.

I have seen elsewhere pressure on professors to use textbooks in introductory American government courses. And as one who teaches such a course, there seems to be no end to the invitations to try out the newest, hottest textbooks. They come now with more bells and whistles than a Cadillac. Some come with CDs, others with special internet links that have interactive media to help explain the complexities of American government.

These textbooks are solitary in their lack of engagement with big ideas, poor in imagination, often nasty in their unclaimed partisanship, brutish for their lack of wisdom, and (lamentably) anything but short.

Something seems amiss in the book business: a student can buy Locke’s Second Treatise, The Federalist Papers, The Anti-Federalist, and Tocqueville’s Democracy in America for a grand total substantially less than many textbooks. Wouldn’t students rather adorn their bookshelves after college with real books, not outdated texts?

Who could condemn students for wanting to sell them back? Unfortunately, because new editions constantly come out (with new internet links!), they’re next to worthless as soon as finals are over.

The benefits of going back to the foundational arguments, at least for an introductory course in American politics, is that they allow (and for the less ambitious, force) students to grapple with the key disputes that have contributed to our constitutional government.

A textbook will describe the Virginia and New Jersey Plans from the Constitutional Convention (and possibly mentioning Alexander Hamilton’s plan), then explain the Great Compromise that led to state equality in the Senate. That is good information for students to know, but why not just read the plans and the arguments raised for and against them?

Admittedly, it is harder to delve into the arguments for and against the convention plans than simply jumping to the historical outcome, but by taking the debates seriously, students can see firsthand the difficulties in defining the nature of the new Union. There was a wisdom worked out through deliberation and compromise, and that wisdom is ultimately more important than the final product.

Imagine asking students who have taken a course in American politics why California and Wyoming have the same number of senators. The A student who learned from a textbook can probably explain the reason why, but not the reasoning. The A student from a primary-source class will have read a portion of the Convention Notes and will therefore not only know the answer, but also understand the statesmanship that went into working out that detail—the wisdom gained through a great debate.

Reading primary sources can be difficult and there is the risk that students will get less out of it than they would from a well-organized and cogent textbook. Those who fear the risks associated with primary sources often fail to see that textbooks carry their own risk, that of giving students the information they need, but not the skills to apply it.

Furthermore, too much of our education system consists of merely telling students things they need to know. They are rarely required to work at prying the meaning out of documents. Learning to do that is a valuable skill. No pain, no gain as they say in sports.

Again, primary sources can be hard, but an engaged professor can motivate the students and help them understand the readings.

This all raises a serious question: What should professors spend their time on?

In the Politics Department at Saint Vincent College, we can still say the most important aspect of the job is teaching.  Primary texts can be challenging, but professors are there to guide the students, to help them learn how to read difficult but important arguments. Our hope is that after college, students can go out and confront arguments, understand them, and respond in kind with arguments of their own. Their minds will be working even when reading bumper stickers.

Class discussions are more likely to occur when students read the great influences on and within American politics. Textbooks rarely give a professor anything to talk about because they tend to water the material down for quick consumption. But discussion arises easily when reading, say, Madison explaining his fear of majority rule or Tocqueville’s account of equality. Well-led class discussions not only challenge the good students to dig deeper into the material, they also give those who struggle the chance to finally understand factions or mores.

Returning to my student, I doubt that Adam would have found the same passion against an idea expressed on a car bumper if he had simply relied on a textbook in class. It is hard to imagine him yelling out his window something about the 17th edition of so-and-so’s textbook on American government. Luckily for Adam, he didn’t have to read such a thing in his politics class at Saint Vincent.

And if I were to guess, I would bet the guy with the bumper sticker received his civic education in a textbook that didn’t even mention Federalist 49.