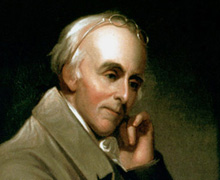 By Maria Popova | “Remember at all times that while you are seeing the world, the world will see you.”

Founding father and American Enlightenment leader Benjamin Rush (1745 — 1813) is among the most diversely influential figures in modern history — he signed the Declaration of Independence and championed many reforms; he opposed slavery and capital punishment at a time when it was fashionable to favor them; he pioneered the free American public school and helped found five institutions of higher learning; he proposed a new model of education for women that included sciences, history, and moral philosophy; he worked for the humane treatment of the mentally ill; he was the first American to hold the title of professor of chemistry (at my alma mater, the University of Pennsylvania) and published the first American chemistry textbook; and he served as the treasurer of the United States Mint for sixteen years.

From Posterity: Letters of Great Americans to Their Children (public library) — the same wonderful anthology that gave us some of history’s greatest motherly advice and Sherwood Anderson’s counsel on the creative life — comes this letter Rush and his wife Julia sent to their twenty-one-year-old son John, the eldest of their thirteen children, after he finished a medical apprenticeship with his father and headed to India to practice his newly acquired skills. Despite the overwhelming religiosity of the letter — a reflection above all of the era’s monoculture — Rush’s advice on the four pillars of the good life includes timeless wisdom on the art of acquiring knowledge and reading books well, the benefits of keeping of diary, the importance of studying geography, and even primitive inklings of Michael Pollan’s modern food rules.

Directions and advice to Jno. Rush from his father and mother composed the evening before he sailed for Calcutta, May 18th, 1796

We shall divide these directions into four heads, as they relate to morals, knowledge, health, and business.

1. Be punctual in committing your soul and body to the protection of your Creator every morning and evening. Implore at the same time his mercy in the name of his Son, our Lord and Saviour Jesus Christ.

2. Read in your Bible frequently, more especially on Sundays.

3. Avoid swearing and even an irreverent use of your Creator’s name. Flee youthful lusts.

4. Be courteous and gentle in your behavior to your fellow passengers, and respectful and obedient to the captain of the vessel.

5. Attend public worship regularly every Sunday when you arrive at Calcutta.

2. Read your other books through carefully, and converse daily upon the subjects of your reading.

3. Keep a diary of every day’s studies, conversations, and transactions at sea and on shore. Let it be composed in a fair, legible hand. Insert in it an account of the population, manners, climate, diseases, &c., of the places you visit.

4. Preserve an account of every person’s name and disease whom you attend.

2. Avoid the night air in sickly situations. Let your dress be rather warmer than the weather would seem to require. Carefully avoid fatigue from all causes both of body and mind.

1. Take no step in laying out your money without the advice and consent of the captain or supercargo. Let no solicitations prevail with you to leave the captain and supercargo during your residence in Calcutta.

2. Keep an exact account of all your expenditures. Preserve as vouchers of them all your bills.

3. Take care of all your instruments, books, clothes, &c.

Be sober and vigilant. Remember at all times that while you are seeing the world, the world will see you. Recollect further that you are always under the eye of the Supreme Being. One more consideration shall close this parting testimony of our affection. Whenever you are tempted to do an improper thing, fancy that you see your father and mother kneeling before you and imploring you with tears in their eyes to refrain from yielding to the temptation, and assuring you at the same time that your yielding to it will be the means of hurrying them to a premature grave.

Sadly, John was either ill-equipped to or chose not to follow his parents’ advice. became a surgeon. John’s adult life was plagued by mental instability and, though he became a surgeon, his medical career was mediocre at most. Three years before his father’s death, John killed a friend in a duel and went insane. He was institutionalized at the Pennsylvania Hospital, his father’s place of work, where he remained for twenty-seven years until his last breath in 1837.

Posterity, however, is full of timeless epistolary wisdom from and to historical characters of decidedly more hopeful fates than John’s.