A Review of “The Liberty Amendments” 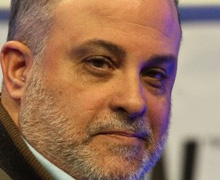 By Thomas Lifson | Tomorrow marks the publication of Mark Levin’s important new book, The Liberty Amendments. I must confess that I had some trepidation when starting to read it, for as the editor of American Thinker I turn down most submissions that propose amending the Constitution as a solution for what ails us. The reason is simple: amending the Constitution is deliberately difficult to accomplish, so changing it is a solution easy to propose and difficult to dispose.

But Mark, whose body of work as a political thinker includes not just the significant tomes Men in Black, Liberty and Tyranny, and Ameritopia but also three hours a day of extemporaneous political talk on one the nation’s most popular syndicated talk shows, is in a different category. And not simply because of his stature. The Liberty Amendments consists of a well thought-out program of amendments (offered as a starting point for discussion and modification), combined with a political strategy that could (at least potentially) work: using a constitutional convention called by two-thirds of the states. As Article 5 of the Constitution reads:

The Congress, whenever two thirds of both Houses shall deem it necessary, shall propose Amendments to this Constitution, or, on the Application of the Legislatures of two thirds of the several States, shall call a Convention for proposing Amendments, which, in either Case, shall be valid to all Intents and Purposes, as Part of this Constitution, when ratified by the Legislatures of three fourths of the several States, or by Conventions in three fourths thereof, as the one or the other Mode of Ratification may be proposed by the Congress; Provided that no Amendment which may be made prior to the Year One thousand eight hundred and eight shall in any Manner affect the first and fourth Clauses in the Ninth Section of the first Article; and that no State, without its Consent, shall be deprived of its equal Suffrage in the Senate.

In Chapter One of the Book, “Restoring the American Republic (also the subtitle of the book itself), Mark lays out his case that judicial precedent and politics have in effect altered the Constitution the framers intended us to have, and restoring a constitutional republic as originally envisioned is going to require some extensive amending. Fortunately, Mark has posted this chapter online for all to read. I urge readers to click on the link and see the case that Mark makes.

The actual program of amendments, each analyzed in a separate chapter, should be read by all who see in this bold and visionary program a way to rescue our republic before it falls, as it surely will if present conditions continue to develop as they have been since the progressives first gained power. Sure, it is easy for me to point out how difficult it is to accomplish the passage of calls for a constitutional convention in 34 states. But take a look at a map of the red states, and then imagine the sort of grass roots movement Mark calls for, one energized and focused on local legislators. And keep in mind that state legislatures would gain enormous resources and power, should something like the program of amendments be ratified. Self-interest, properly checked and balanced, is the essence of our founders’ wisdom, and legislative self-interest is a factor worth keeping in mind.

The chapter titles indicate in broad outline the nature of the constitutional program Mark has in mind:

An Amendment to Establish Term Limits for Members of Congress

An Amendment to Restore the Senate (repeal of the 17th Amendment establishing direct elections, provisions for replacement of senators before the end of their terms, and establishing the right of a state legislature to remove a senator upon a two-thirds vote).

Two Amendments to Limit Federal Spending and Taxation (limiting the federal government to outlays not exceeding 17.5% of GDP, and limiting total federal tax collections from any source to no more than 15% of a person’s income). I must confess that I found reliance on specific numbers troubling here and in a few other amendments because there is so much room for manipulation in calculating GDP and income, or in determining the value of certain dollar amounts included in other amendments.  But Mark makes very clear his is not the last word on this or any other subject, but merely a proposal to get people thinking about an entire package that counteract the transformation of the federal government into a colossus never imagined by the founders.

An Amendment to Limit the Federal Bureaucracy (automatic sunset for all department and agencies if they are not legislatively reauthorized, mandatory congressional authorization of any regulation imposed by bureaucrats if the economic burden exceeds $100 million).

An Amendment to Promote Free Enterprise (redefining the Commerce Clause to a specific grant of power limited to preventing states from impeding commerce among the states, and preventing Congress from regulating commerce within a state).

An Amendment to Protect Private Property (curbing abuses under the Takings Clause).

An Amendment to Grant the States Authority to Directly Amend the Constitution (allowing two thirds of the states, voting for the exact same language, to amend the Constitution, and providing a six year time frame within which the passage must be secured).

An Amendment to Grant States Authority to Check Congress (three fifths of the state legislatures may overturn acts of Congress or larger impact executive orders, within 24 months, with no judicial review permitted).

An Amendment to Protect the Vote (requiring photo ID for voting in person or via mail ballot and prohibiting electronic voting).

My summaries of the gist of each amendment ignore finer points in the text of each, not to mention in the discussions Mark presents.

Conservatives badly need to come together on a vision for America that can be presented to the American people as a way out of our dysfunctions that multiply with each growth of federal power. If Mark Levin succeeds in kicking off a grassroots movement to restore the constitutional balance, he will have performed a historic public service.

FTU Note:  If you liked this review, you may also want to watch for the announcement of the Leadership Institute’s segment on “Constitutionalism, Federalism & The Courts” by Mark Levin coming out this Wednesday, October 23, as part of their series on American Conservatism.