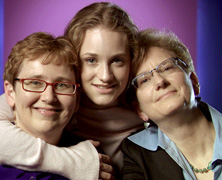 By Michael Bauman | You might recall the awful option faced by the title character in “Sophie’s Choice:” Pick one child or the other.  It’s not a choice any mother wants to make.  No matter what she chooses, her loss is unutterable.

Nor would any child want to make the same choice in reverse:  “Mommy or Daddy, Sally.  Pick one.”

But that is the ugly position into which same sex marriage plunges children, except that the children themselves do not get to choose.  Someone else chooses for them.

No matter what you might think about same sex marriage, we know this:  Any child raised under a same sex union faces a tremendous loss — either no Mommy or no Daddy.  In a union where two men or two women are involved, that’s always the outcome.  When Mommy picks a woman or Daddy picks a man as a life partner, the children always lose something enormously valuable and irreplaceable:  a mother or a father.

That loss often has tragic consequences for a child.  If, for example, you are raised in a home with no father around, the odds that you will drop out of school, that you will take or sell drugs, that you will go to prison, that you will be poor, and that your children will suffer the same fate you did all skyrocket.  That same cycle of hopelessness and crime follows upon the absence of a mother.

When Mommy has sex with another woman, it doesn’t make that other woman a Daddy.  Having sex with Mommy doesn’t make you a Daddy any more than drinking milk makes you a calf.

I say so because, according to a recent groundbreaking study by University of Texas scholar Mark Regnerus, we discover this:

Compared to children who were raised in intact homes with both the biological father and mother present to raise them, the children of homosexual parents grow up to:

Let me clarify a point often misunderstood:  I am not saying that marriages without children are not marriages.  I never once said that or meant that.  I am saying that marriage and family go usually together.  I am talking about a common connection between marriage and family, not a necessary pre-condition for marriage.  Marriage and family are simply the usual mechanism of creating and nurturing the next generation.  But in the case of a homosexual union, that is naturally impossible.  And if you try to grant them by some other means the children nature denies them, then the children are statistically more likely to suffer bad consequences as a result, which is not the case with a heterosexual marriage.  Or, put differently, my wife and I have no children as yet.   I obviously do not argue that we have no marriage.  If we had children, it wouldn’t as likely damage the children involved as would being raised by two men or two women, a situation that entails the significant loss of either mommy or daddy.  In short, wise governments and wise citizens do well always to remember that important and basic fact of life and to avoid making laws that undermine the traditional family and traditional family roles, which serve us and our offspring best.